This is a walkthrough for the boss fight Deathguise from the game Final Fantasy IX (FF9, FF IX). Read on for tips and strategy about how to beat Deathguise, including Deathguise's stats and other useful information. 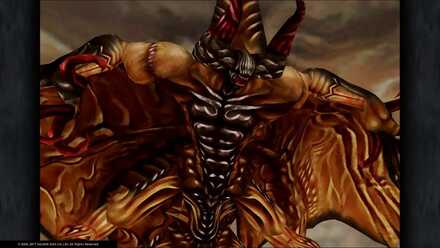 This boss has the power to look at you in the face and say “Go level up some more”. Deathguise has several moves that can annihilate the whole party instantly, and proper preparation is crucial for this fight.

Deathguise starts the battle by casting Meteor, which can eliminate the whole party immediately. Watch out for Twister as well. Make sure that your character's levels aren't divisible by 5 to avoid LV5 Death.

Having Auto-Life can potentially turn the battle greatly in your favor due to Deathguise's opening move Meteor. Equipping HP+20% or HP+10% will also help. Return Magic is also viable to return Deathguise's Twister back to it.

Watch its mode, and if its wings are open, use Protect on the whole team, as Deathguise will only use Physical attacks. While its wings are closed, it uses Twister, LV5 Death, and Death. Capitalize on Deathguise's weakness to Ice, and use Ice elemental attacks to make quick work of him.

Register as a member and get all the information you want. (It's free!)
Login
Opinions about an article or post go here.
Opinions about an article or post
We at Game8 thank you for your support.
In order for us to make the best articles possible, share your corrections, opinions, and thoughts about "How to Beat Deathguise" with us!
When reporting a problem, please be as specific as possible in providing details such as what conditions the problem occurred under and what kind of effects it had.