This page will show you all about Amber, a character in Brawl Stars. Read on to learn Amber's stats, attacks, gadgets, star powers, skins, best maps, and how to use her!

This page will show you all about Amber, a character in Brawl Stars. Read on to learn Amber's stats, attacks, gadgets, star powers, skins, best maps, and how to use her!

Amber blows a flaming inferno at her opponents. It looks awesome, but watch out or you'll get seared!

Note: This is the stat of Dragon's Breath at Power Level 1.

Amber throws a flask of her fire fluid that she can light up with her firebreathing. Bushes and opposing Brawlers will be toast! (One flask at a time!)

Note: This is the stat of Torch 'em at Power Level 1.

How to Use Amber 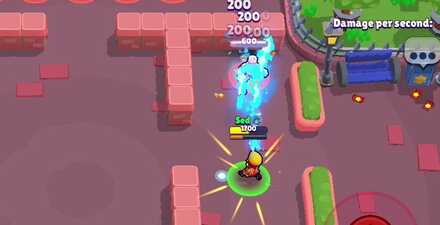 Amber is one of the Brawlers with high damage output in the game. Most enemies that stay long in her range will, without a doubt, get killed by her. Just be careful attacking your enemies, as you will also be exposing yourself to their attacks. 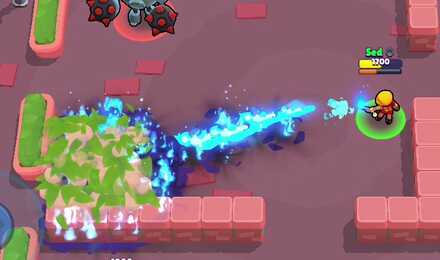 Consider destroying the bushes on the enemies' side to prevent them from hiding. It will also make it easier for your team to counter them if they're trying to get close, as you will be able to see where they are. You can use your Super to burn down the bushes.

Amber's Fire Starters Gadget is best when used for escaping opponents. It makes her move faster while leaving a trail of fire fluid behind, making it harder for pursuers to follow and kill her.

Having Amber's Wild Flames Star Power allows her to have 2 fuel puddles while recharging her Super by standing on one of them. This Star Power is extremely helpful if you want to control some areas of the map.

Her Scorchin' Siphon increases her Normal Attack reload speed when she's standing on a fuel puddle. This Star Power can help you keep attacking your opponents until they're killed. Just be careful not to set the fuel puddle on fire, or you'll lose the increased reload speed!

Register as a member and get all the information you want. (It's free!)
Login
Opinions about an article or post go here.
Opinions about an article or post
We at Game8 thank you for your support.
In order for us to make the best articles possible, share your corrections, opinions, and thoughts about "Amber Stats, Skills, and Skins" with us!
When reporting a problem, please be as specific as possible in providing details such as what conditions the problem occurred under and what kind of effects it had.