This page will show you all about 8-Bit, a character in Brawl Stars. Read on to learn 8-Bit's stats, attacks, gadgets, star powers, skins, best maps, and how to use 8-Bit!

This page will show you all about 8-Bit, a character in Brawl Stars. Read on to learn 8-Bit's stats, attacks, gadgets, star powers, skins, best maps, and how to use 8-Bit!

Shoots a burst of Blaster Beams that damages any opponents they hit. The beams have medium range and a slight spread.

Note: This is the stat of Blaster Beams at Power Level 1.

Deploys a turret that increases the damage output of all friendly Brawlers in its area of effect.

Note: This is the stat of Damage Booster at Power Level 1. 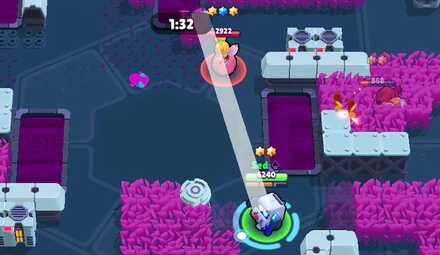 8-Bit's attacks can reach enemies from a distance. Make use of his range attacks to damage and kill enemies, and try not to get close to them as it will put 8-Bit at a disadvantage. 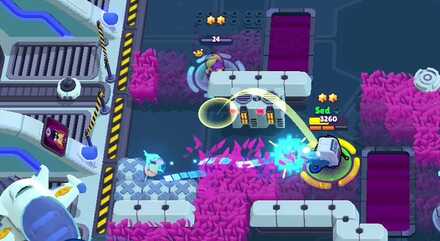 Always put 8-Bit's Damage Booster behind a cover to prevent it from getting destroyed from the crossfire between your team and the enemy team. You can also use it as a shield to take the attacks when you're about to die, so keep it in mind! 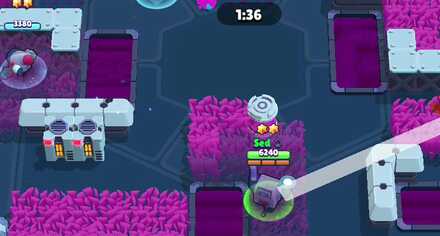 Don't stay in open areas, for 8-Bit has a slow movement speed, and you'll be an easy target to your enemies. Always stay near a wall or a bush so you can hide and evade enemies' attacks. 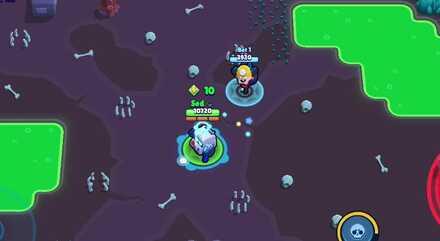 8-Bit's Gadgets are both useful in battle. But in terms of survival capabilities, Cheat Cartridge is better than Extra Credits. However, Extra Credit would be a much better choice for events with PvE elements like the Siege or some of the weekly events like the Boss Fight. Make use of them depending on the event you want to participate in! 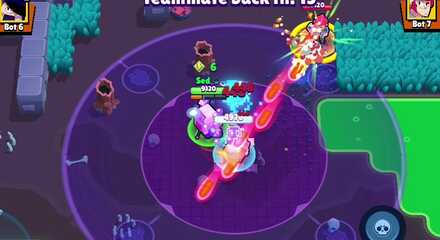 8-Bit's Star Powers are both excellent in battle. Boosted Booster is good when you want to focus on providing damage buff to your teammates as his Super will have an increased range. Plugged In is more useful if you desire to give 8-Bit a bit of a speed boost in a match. It works well with his Cheat Cartridge Gadget.

In order for us to make the best articles possible, share your corrections, opinions, and thoughts about 「8-Bit Stats, Skills, and Skins | Brawl Stars」 with us!