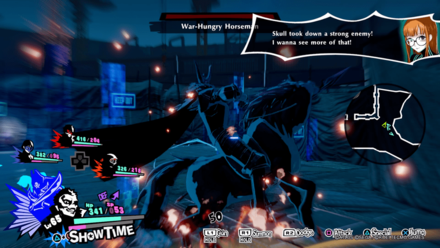 This is a guide on how to defeat the War-Hungry Horseman Dire Shadow in Osaka Jail. Read on to find out its weaknesses, strengths, and the best characters to put in your party to defeat it! 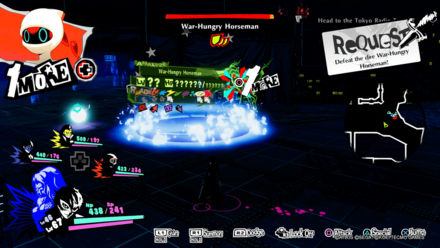 One of the last few of the Dire Shadows you have to worry about. The hoseman offers up a good challenge, with attacks that can knock out a good 3/4 of your health, so be wary of each and every one of its moves.

Having Makoto tag along for this fight frees up Ryuji to freely cast Elec based skill attacks against the horseman. Joker with Curse based skills covers its third weakness, while Sophia can bring the team some breathing room with Bless based skills along with healing. 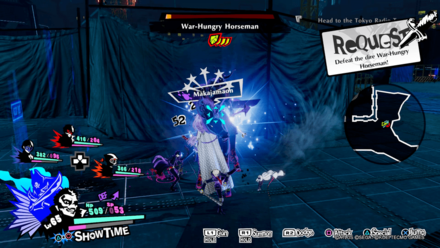 Difficult, but not impossible. You'll need to be very vigilant of what kind of attack the War-Hungry Horseman will do – there are two main ones to be really worried about, and these are when it summons a cyclone to hit everything around, and an earth shattering attack that spreads out. Be careful of these primary ones.

With Makoto on the team, Ryuji is freed up to cast Elec based skills against the horseman. Do so liberally, switching now and then to Joker or Sophia for Curse or Bless attacks respectively. Be careful to save a little bit of Sophia's SP for moments where she'd need to heal the party however, or simply leave this task to Makoto instead.

Register as a member and get all the information you want. (It's free!)
Login
Opinions about an article or post go here.
Opinions about an article or post
We at Game8 thank you for your support.
In order for us to make the best articles possible, share your corrections, opinions, and thoughts about "War-Hungry Horseman Battle Guide | Dire Shadow" with us!
When reporting a problem, please be as specific as possible in providing details such as what conditions the problem occurred under and what kind of effects it had.