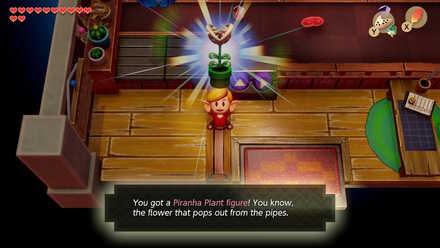 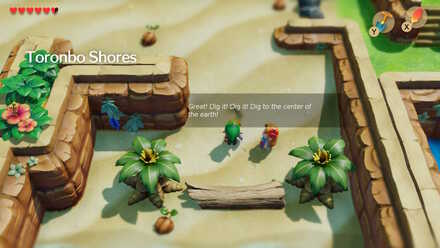 If you use the shovel while traveling with Marin, she will ask you to dig to the center of the earth. 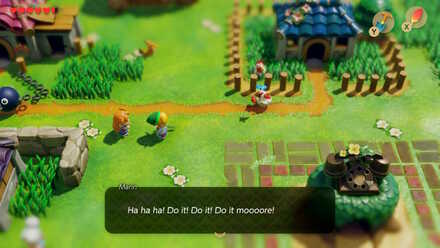 If you attack a cucco multiple times while traveling with Marin, she will say something out of her character. 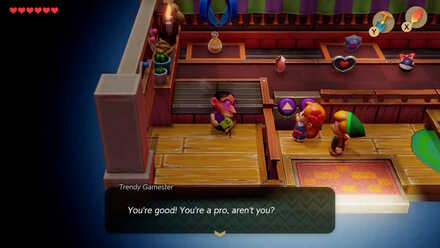 If you bring Marin inside the Trendy Game, she will ask you if she can play. If you allow her to play, she will grab the trendy gamester with the crane. 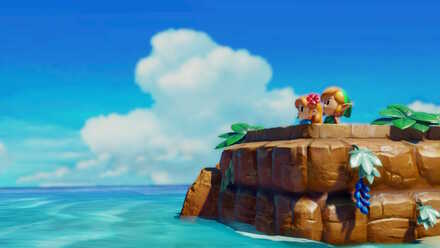 If you bring Marin to the lower left corner of Toronbo Shores, it will trigger a secret cutscene where Marin says that this is going to be your secret place. 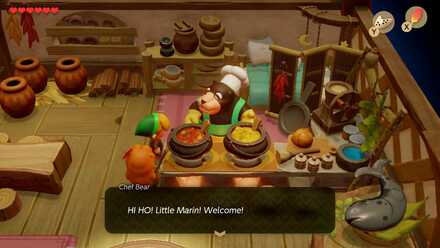 Falling into the Well 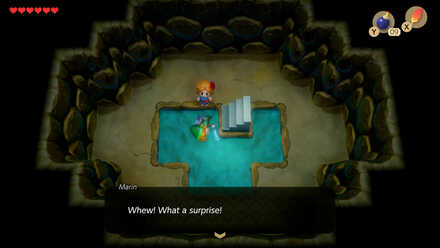 If you jump inside the well on Mabe Village, Marin will also jump inside and accidentally step on you. 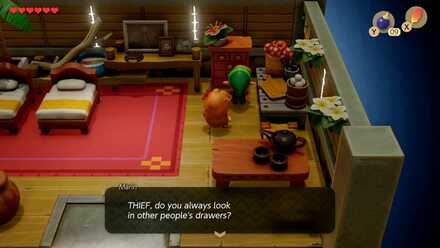 If you try to interact with drawers with Marin, she will ask you if you do this often. 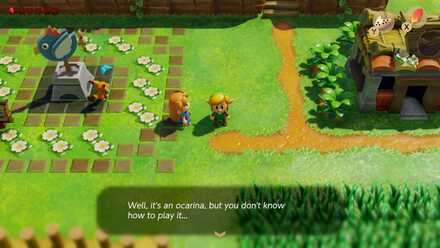 If you play the Ocarina while traveling with Marin, she will tell you that you are not very good. 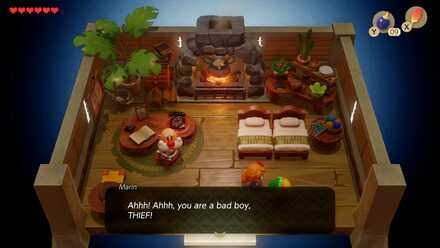 Marin will tell you that you are a bad boy if you break pots while traveling with her. 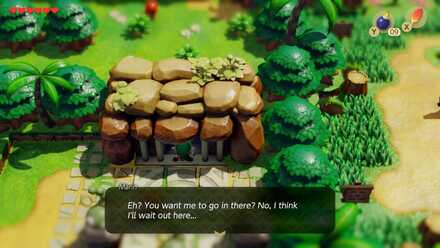 Marin will tell you that she will not come with you if you try to enter a dungeon while traveling with her. 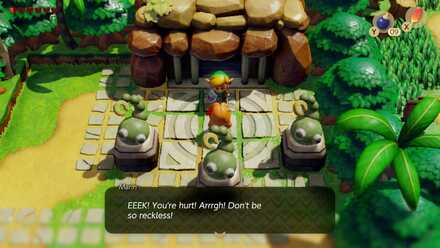 If you exit the dungeon with low Heart Marin will get mad at you for being reckless. 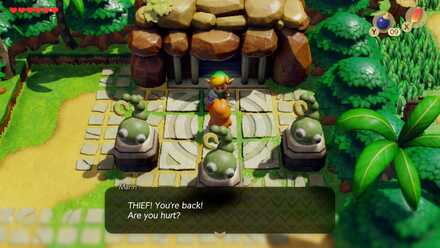 If you exit the dungeon with max Heart Marin will ask you if you got hurt. 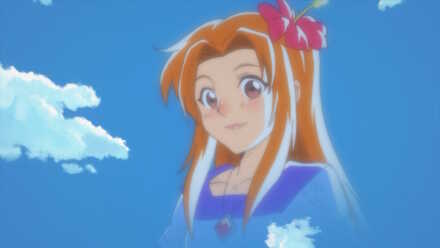 If you are able to finish the game without dying even once, it will trigger a short hidden cutscene otherwise unavailable. 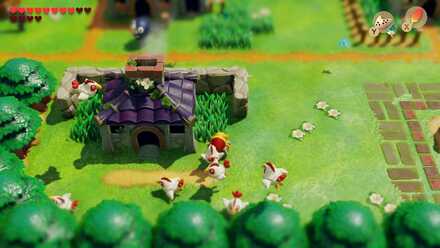 Continously attacking a cucco in Mabe Village will spawn multiple cuccos that attack you non-stop until you leave the area. 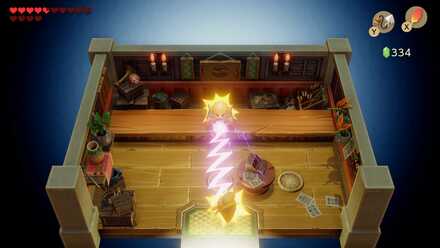 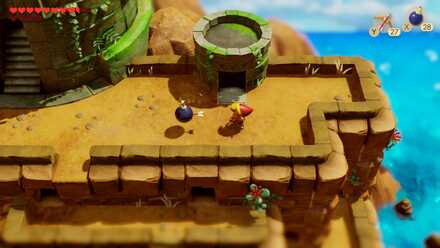 You can shoot an arrow with a bomb attached that explodes on contact. You can do this by pressing both the Bomb button and the Bow button at the same time. Both the Bomb and Bow should be equiped on the X and Y button in order to use this technique.

Ballad of the Windfish Attack 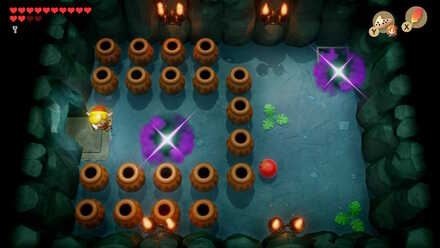 You can play the song ballad of the windfish to instantly kill Pols Voice. 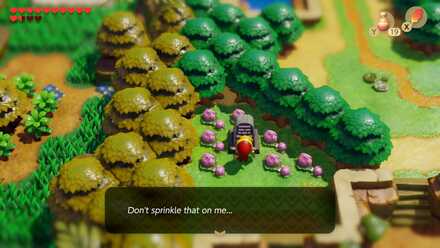 Using Magic Powder on the Tombstone of the Ghost of Koholint will make the ghost angry. 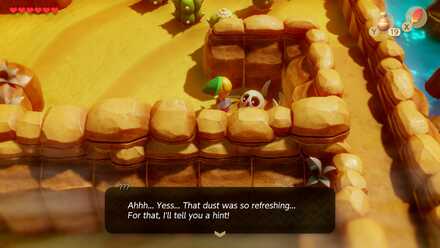 Using Magic Powder on the Skull with eyes at the middle of Yarna Desert will make it talk to you, giving you a hint for a secret. 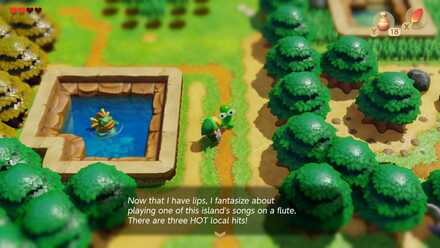 Using Magic Powder on any Buzz Blob will allow link to interact with them giving them their own dialogue.

Changing your file name to Zelda will cause a different song to play than the normal song.

Changing your file name to 'Marin' will cause a different song to play than the normal song.

Changing your file name to 'Totakeke' will cause a different song to play than the normal song.

If you stay inside Richard's Villa for 2 minutes and 30 seconds, Totaka's Song will suddenly play in the background. 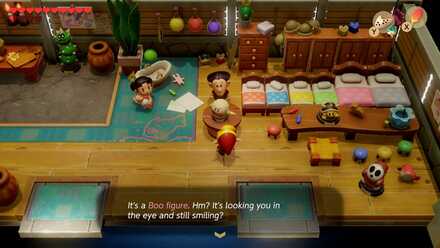 All of the collectible figures you can collect in the Trendy Game are popular Nintendo characters. 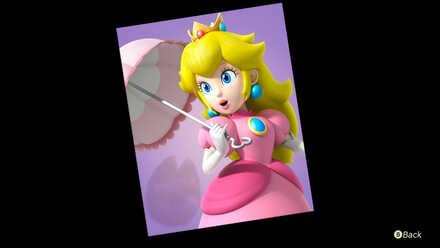 You can see Princess Peach from Christine's letter for Mr. Write. 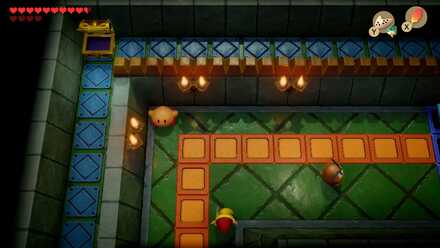 You can find different popular Nintendo characters (from the Super Mario Bros as well as Kirby series) all across Koholint Island as enemies.

Register as a member and get all the information you want. (It's free!)
Login
Opinions about an article or post go here.
Opinions about an article or post
We at Game8 thank you for your support.
In order for us to make the best articles possible, share your corrections, opinions, and thoughts about "Easter Eggs and Secrets" with us!
When reporting a problem, please be as specific as possible in providing details such as what conditions the problem occurred under and what kind of effects it had.