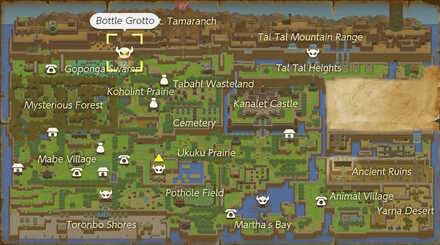 This is the walkthrough for the 2nd dungeon in The Legend of Zelda: Links Awakening (Remake) for the Nintendo Switch. Read on to see how to reach this dungeon, solve the dungeon's puzzles, and defeat the bosses to beat this dungeon.

Getting to Bottle Grotto

Getting to Bottle Grotto Objectives 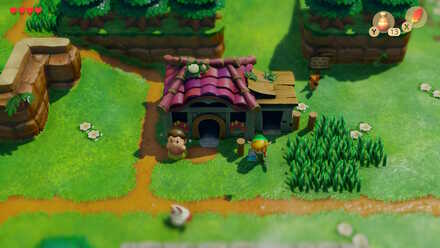 Using your new Roc’s Feather, you will be able to enter many areas of Koholint Island that you could not before. After exiting Tail Cave, the owl will come and tell you to head toward the Goponga Swamp. As you near towards Mabe Village, the two ball playing boys will come and tell you that BowWow, one of the villagers’ pets, had been kidnapped by moblins. Now it’s up to you to go save him.

If you have not done so already, there are several items that can be picked up in Mabe Village. Here they are: 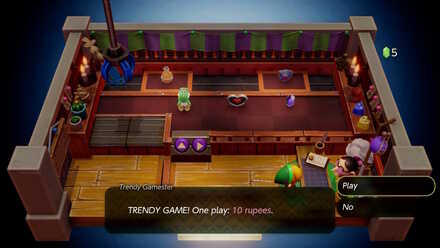 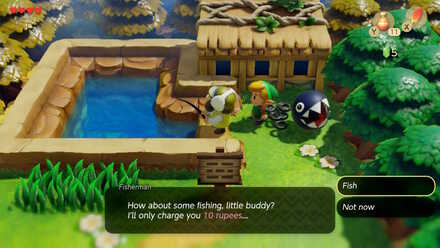 Piece of Heart #4 and #5 can be obtained from the fishing hole by catching a small fish and a medium sized fish. Like the Trendy Game, tho minigame is playable for 10 rupees. For more information on this mini game, see the Fishing Hole Walkthrough. 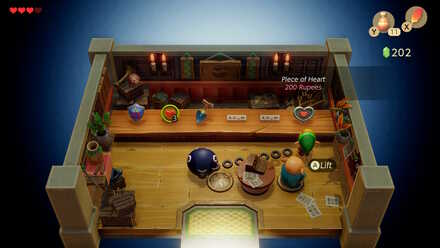 Several items can also be purchased for your hard earned rupees at the shop. They include Piece of Heart #6 (200 rupees) and the Deluxe Shovel (200 rupees). The shovel will be needed later on, but at the moment you will be fine without it, so get whatever items you want (and can afford) head out. 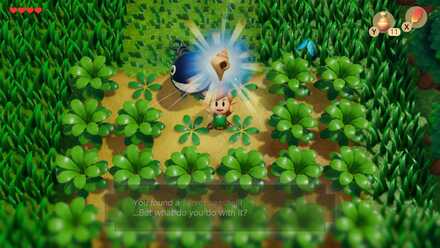 Near the shop, there is a large patch of cuttable grass. Toward the center, there is a patch that can be cut to obtain Secret Seashell #1. These shells can be collected to trade later on for various prizes.

After you are ready, head northwest toward the Mysterious Forest. 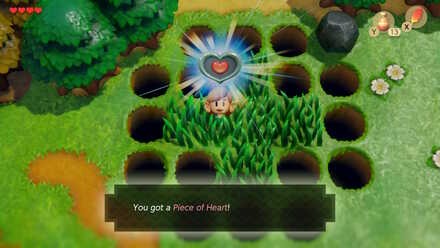 Head through the mysterious forest toward the witch’s hit from earlier. This time, you will be able to jump over the holes and obtain Piece of Heart #7.

Continue north to reach Tal Tal Heights. Immediately go right to see a cave with a skull on it the front. Step inside to be challenged by a Sword Moblin. Shield his attack and strike, then continue to the door that opens on the upper left side. Four moblins are waiting for you in the next room. Defeat them and continue to the room on your right.

In the next room, you will encounter King Moblin. This foe has two attacks. For the most part, he will stand to your right or left and face you will side stepping and throwing javelins, and he cannot be damaged during this phase. Occasionally, he will roar and charge at you. If he misses, he will headbutt the wall, leaving him dizzy and immobile for a moment, allowing you to damage him. Repeat this until he is defeated. 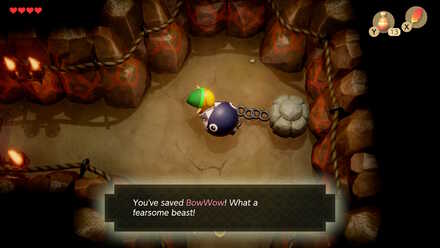 He will drop a fairy when defeated, and the right side door will open. Step in this room to free BowWow, who will stay by your side on a leash. BowWow will devour nearby enemies (making you wonder how was captured to begin with), but more importantly, he will eat the plants blocking the path to Bottle Grotto, allowing you to gain entry to the dungeon. 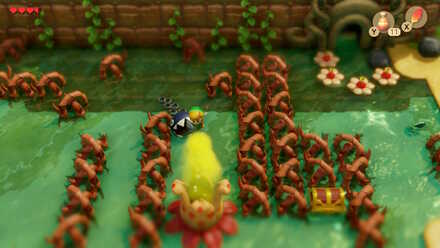 To get to Bottle Grotto, you will need to leave Moblin's Cavern, and go back to the mysterious forest. Go to the northwest area, near where you obtained the Tail Key. From here, exit the mysterious forest by going north. Watch out for the Like-Likes encountered here, as they cannot resist the flavor of your shield, and if they devour it, you will be the one left buying a new one. 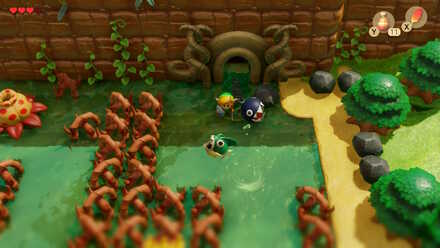 Continue west to arrive at Goponga Swamp. Have BowWow eat the plants in your way and makr your way to the dungeons entrance. After he eats the plants blocking the door, you are free to enter. 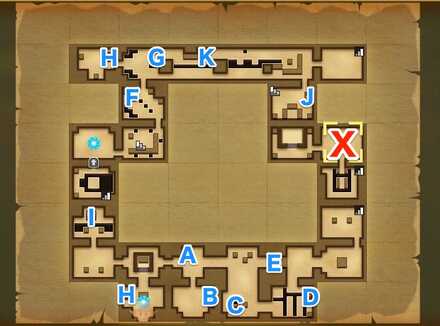 Once inside, you will see a chest surrounded by pots. Surprise! It cannot be obtained just yet. Continue north into a dark room. The only visible thing here are the sparks, which will damage you if you touch them. In the center of the room, there are two unlit torches. Add some magic powder to light up the room and reveal the door on the right. In the next room you will encounter two stalfos. Defeating them both will make small key #1 fall to the ground. 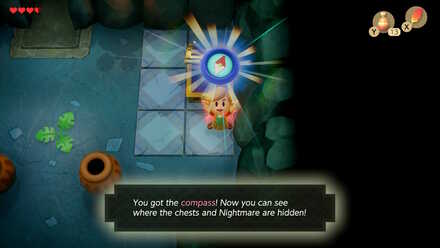 Use a key to open the door south of this one. Inside you will have to fight a Mask Mimic. These foes will mirror your movement, and can only be damaged from behind. Draw near it and turn away so you are both back to back, then hold B to charge up a spin attack and slay it. Doing so will give you a chest with the Compass.

Go back, and continue east. In the next room you will see a color switch. Slash it with your sword to flip the color blocks, allowing you to go south into the next room. Here you will encounter a Shrouded Stalfos. Shield its attack and strike when it is caught off guard. Go to the corner of the colored blocks and slash the switch to flip the blocks again, allowing you to open the chest containing small key #2.

Continue to the room on your right and jump over the gaps with Rocs feather to the other side (pick up the magic powder if needed) and step on the switch here to reveal a chest containing small key #3. Jump back to the center of the room, then jump to the northernmost platform to enter the next room.

Here you will encounter two Mask-Mimics. Defeating them will make small key #4 will drop on the other side, so you will need to go back to where the first color switch was, and then go right to obtain it.

Go back to where you fought the two Mask-Mimics, and head into the next room. Two Spiked Beetles are here, so either defeat them or just run ahead to reach the locked door. Open it and go into the next room. In this room you will encounter a spark and two keese. There are two blocks in the center of the room, and a two white floor panels in between them. Push the blocks onto the panels to reveal a hidden staircase. 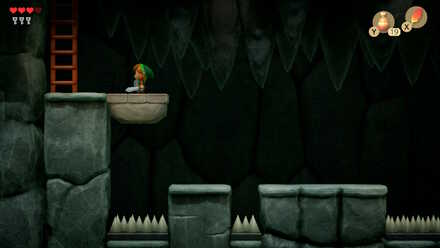 You will go through a platforming section with moving platforms and spikes underneath. Time your jumps so you do not fall, and reach the ladder on the far left side. Once you arrive in the next room, head to the revolving door on the north wall, while being careful not to get hit by the keese/spark here. 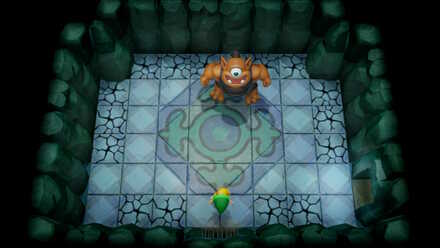 Coming into this room, you will be greeted by a large cyclopes known as a Hinox. He has two attacks: one where he throws a bomb at you, and one where he rushes at you to grab and throw you. Watch out for the cracked tiles while you avoid his rush-in attack. When he rushes at you and misses, you will be able to deal 2-3 hits to him. After awhile he will die, leaving behind a fairy and a warp point.

Proceed through the room on your right, and then in this room, jump over the hole to go into the door on the top right section of this room. The next room has a vacuum mouth that will suck up everything, including the keese here. Its pull will usually just make you fall into a hole, but if it somehow manages to suck you up completely, you will return to the start of the dungeon. Avoid its pull by running in the opposite direction, then grap the map form the chest right above it.

Continue north, and obtain 20 rupees from the treasure chest in this room. Use a key to unlock the door on the left wall. Here, you will fight two boos, who will vanish if you try to attack them with your sword. Use some magic powder in the torch to light up the room, which will allow you to attack the boos. After defeating them, a chest with the Power Bracelet will appear. In this game, this item is automatically equipped to the A button, so now you will be able to move pots and rocks that previously stood in your way.

Head back to where you defeated the Hinox, and warp to the start of the dungeon. Grab the 50 rupees from the chest here, and go north, then go west in the next room to pass through the locked door. The room here contains keese, as well as blade traps right next to the door, so jump over them or time your movement to walk ahead. You do not need to light the two torces with powder, simply go north into the next room. In this room, jump across the hole and open the chest for the stone beak.

Going back to the warp point and into the next room, the owl statue will tell you to defeat the Pols Voice first, and the Stalfos last. Pick up and throw a pot to reach the stairs. Cross through the platforming area (watch out for Piranha Plants here), and upon reaching the next room, you will encounter 3 enemies. First, move the blocks to free the Pols Voice, and throw a pot at it to kill it. Next, slash down the keese, and finally the stalfos to reveal a chest with the Nightmare Key.

Go back to where you picked up the 20 rupees near where you obtained the Power Bracelet and head right. Hit the color switch while on the orange titles to raise the ground, and then go right and hit it again, which will let you reach the chest containing small key #5. From here, continue right until you reach a locked door. Unlock it and go through.

Getting to the Nightmare Lair

The next room is surrounded with pots. Pick them up with A and throw them at the Pols Voice to kill them. After defeating the enemies here, go to the staircase that appears. You will enter another plaforming section. The first platform will lower automatically when standing on it, but the second one can only be lowered by holding a pot while standing on it. Go up the stairs into the next room and jump across the holes to reach the Nightmare Lair.

Genie will begin by throwing fireballs at you. Dodge these until he runs out, at which point he will retreat into his bottle and approach you. Slice him with your sword, then after the bottle falls, pick it up and throw it at the wall. Repeat this two more times, and on the third time his bottle will break.

After this, two Genies will spin around the room, but they are transparent and incapable of hurting you or taking damage. Eventually, Genie will come out and throw a large fireball and swing punches. Dodge this fireball and hack away at him with your sword. Repeat this two more times to defeat Genie and get a Heart Container. 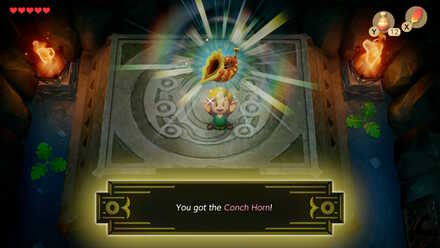 Continue into the next room and pick up the Conch Horn to complete the dungeon.

In order for us to make the best articles possible, share your corrections, opinions, and thoughts about 「Level 2 - Bottle Grotto Walthrough | Zelda: Link's Awakening (Switch)」 with us!