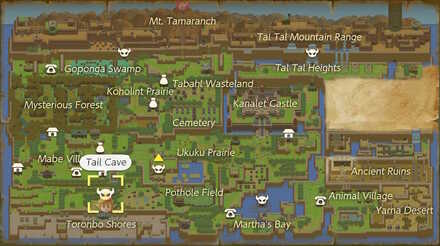 This is the walkthrough for the 1st dungeon in The Legend of Zelda: Links Awakening (Remake) for the Nintendo Switch. Read on to see how to reach this dungeon, solve the dungeon's puzzles, and defeat the bosses to beat this dungeon.

Getting to Tail Cave

Getting to Tail Cave Objectives 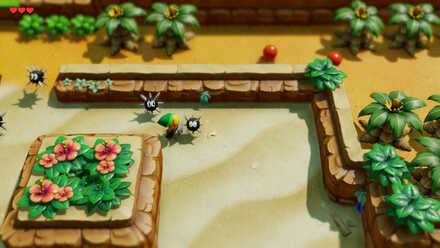 First, you will want to get up and speak with Tarin to get your shield. Leave the house and head west, then south, towards Toronbo Shores. After you have arrived at Toronbo Shores, you will need to push the Sea Urchin out of your way to proceed. Do so by holding your shield with R/ZR and walking. These enemies are invincible, so even after you get your sword back, do not waste time trying to kill them.

While heading back North toward Mabe Village, you will encounter the two boys are throwing a ball once again. The well just north of here can be entered by jumping from the cliff. Doing so will net you Piece of Heart #1. 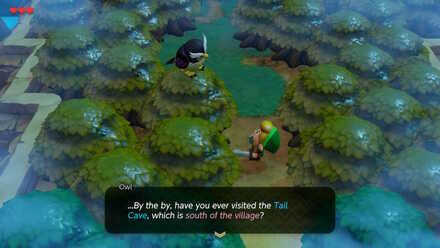 After entering the Mysterious Forest, head Northeast past the Moblins. Defeat any Moblins in your path by shielding their javelins, and cut them down with your sword. Continue right until you see a log that can be entered. 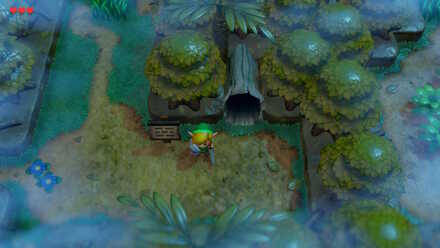 One inside, defeat the Keese, and break the purple crystals with your sword. Be wary of the cracks on the ground, as standing on them for too long will cause you to fall through. After this, push the stone blocking the treasure chest in either direction to obtain 50 Rupees. 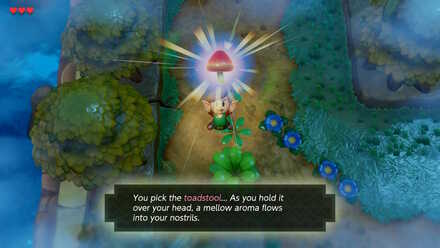 Contiue to the next room, and you will spot another Heart Piece, but it is currently unobtainable. Push the stones out of your way to exit the cave. Right after exiting you will encounter a Sword Moblin who will charge at you. Shield his attack and strike him while he he drops his guard to defeat him, and pick up the Toadstool to the left side of the screen.

Head back through the cave you came from and push the stones again to pass through the room (note that you can exit and re-enter the room to reset their positions if needed). After exiting the cave again, head north and take out the moblins in your way. If you are low on hearts, take a right and go through a small opening to have the Great Fairy restore your health. Continue north and go right when you see the cave blocked off by rocks (you cannot move them yet).

After arriving in Koholint Prairie, you will spot another Piece of Heart which, again, cannot be obtained just yet. Head south east, and avoid attacking the Green Chuchu, as it will deal damage to you. Once you come upon a wooden house with a large skull on the roof, head inside. Talk to the witch inside to receive the Magic Powder. Set it to X or Y and head back toward the Mysterious Forest.

Trace back toward the cave you entered (you can now defeat the Chuchu by sprinkling magic poweder on it before striking), but this time head left toward the entrance of the Forest. Go north once you reach the area with several Moblins, and eventually you will see a strange racoon looking fellow by a tree. Sprinkle some magic powder on him to reveal that he was actually Tarin. You will now be able to proceed forward. 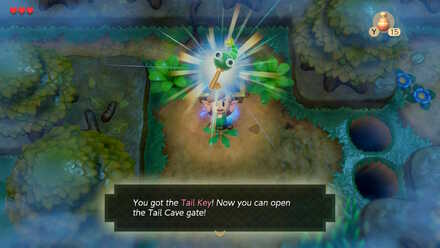 Cut the grass in front of the treasure chest and open it to receive the Tail Key. Now you are ready to enter Tale Cave, so head back toward Toronbo Shores. After going down the stairs south of the boys playing ball, turn right before reaching the beach, and continue around the trees to arrive at the front of Tail Cave. Use your key to unlock the entrace and head inside. 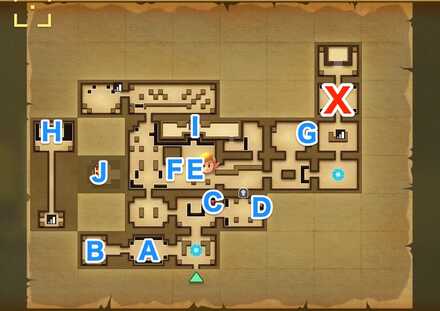 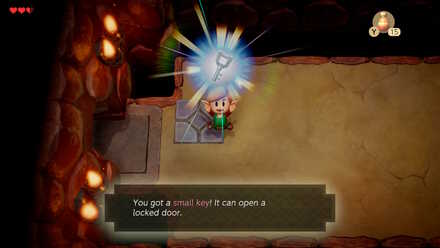 The room on your immediate left after entering the dungeon is home to two Hardhat Beetles. These enemies cannot be beaten with your sword, but they can be pushed by hitting them with your sword or blocking them, so shield their advances to push them off the ledge. After you defeat them, you will obtain a small key. 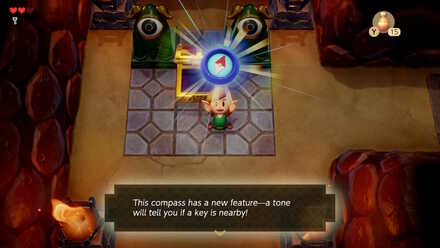 After obtaining Small Key #1, go into the left room and the door will shut. Defeat the red Zol here to open them back. Be weary of the torches' flames, which can be shielded to avoid damage. Open the treasure chest to receive the compass. In this game, the compass will make a sound to indicate a nearby key (in addition to displaying treasure and boss locations for the dungeon). 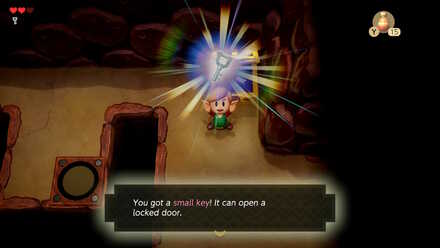 Go back towards the dungeon entrance. This time go north, and defeat the enemies here. Step on the switch in the middle of the room to reveal a chest containing Small Key #2. 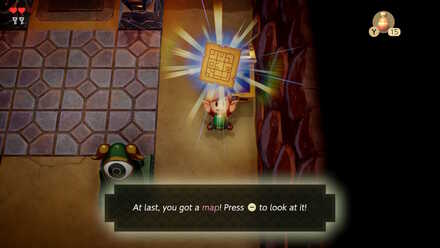 Go into the room on your right to encounter several enemies. The Stalfos will jump away when you slash at them, so you can defeat them by either cornering them and hacking away, or by slashing at them so that they fall into the hole. After the enemies have been disposed of, a chest will appear with the Map. This is a useful item which will show you the overall layout of the dungeon. 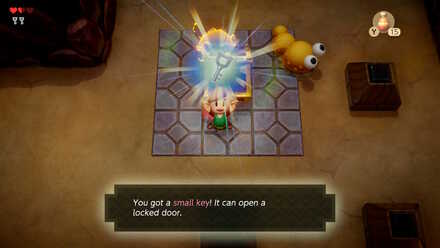 Next head through the revolving door, and head to the center of the room. There is a chest in here surrounded by enemies, so watch your step and open it to reveal Small Key #3. A chest with 20 rupees will also reveal itself by defeting the two Mini-Moldorms in the room.

In the far left part of this room there is a suspicious looking wall. It can be bombed to open it up in order to enter a room with Secret Seashell #18, but since you do not yet have the bombs, you will have to come back for it later. 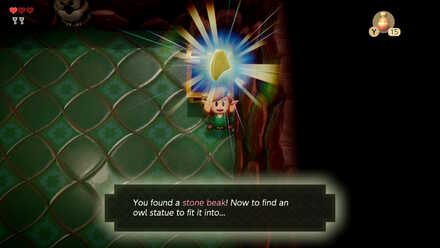 Head back towards the revolving door, and use your key to go into the next room. Avoid the Sparks in this room and head north. In here, you will encounter an enemy called Three-of-a-Kind, which rotates different card suits. They can only be defeated by timing your attacks to stop them all on the same suit. Deal with them to reveal a chest with the Stone Break. This can be inserted into owl statues found in Dungeons (like the one in this room) to get hints from the owl.

Return to where you picked up Small Key #3, and go left and upwards toward the locked door. A Blade Trap will hit you if you are not careful, so bait the trap to move, then pass by after it resets. Alternatively, push the block in front of it so it cannot come out. In the next room, avoid the Sparks and obstacles to see a block that is out of alignment. Push it right to open the door. 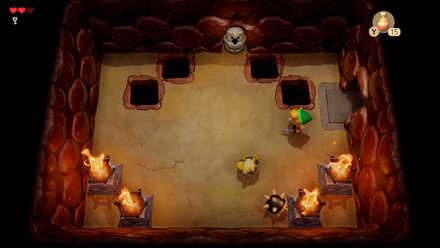 Two Spiked Beetles are waiting for you in the next room. Shield their charges, and then attack while they are flipped over. After defeating them, a staircase will appear. This will take you to a platformer section with Goombas. Head on to the left and uppermost area to emerge. 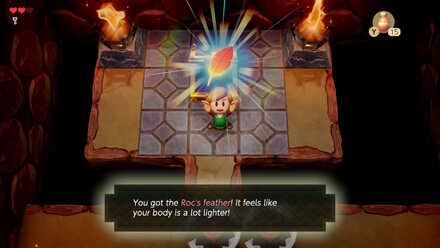 Once out, go straight ahead, being careful of the Blade Traps. The chest here contains Roc's Feather, a very useful item which will allow you to jump when pressed. Head down and use the feather to jump and grab the 3 hearts if needed. You will now be able to breeze through the platforming section by jumping.

Return to the room where you picked up small key #3 again, and go toward the top right area to see a gap that you can now jump over. Hop over the gap with Roc's Feather, then use your last key to open the block that is in your way. Go up the stairs and open the chest to get the Nightmare Key. 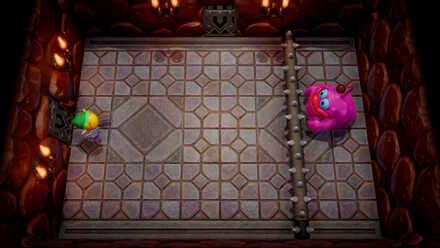 Go back to the room south of where you got the stone beak. Jump over the gap here to enter the room with Rolling Bones. Rolling Bones will roll a spiky log while jumping toward you. Avoid taking damage from the log by jumping over the bar with Roc's Feather, and attack Rolling Bones when he is not directly facing you to avoid getting hit. Continue this to defeat him and obtain a fairy. Go north to find a room with a set of stairs (which you can skip), and the boss door. Insert the boss key and open the door.

Moldorm's tail is vulnerable when red, so draw near and strike. Doing so will anger him, causing him to speed up temporarily and become impervious to attacks. While he is in this angered state, you should stay away from the cracked tiles and holes, as he can knock you down there, which is very annoying. Shield him or avoid his movement and wait for an opening. After striking him the 3rd time, he will speed up and glow red while remaining fast. Deliver the fourth and final blow and he will explode. 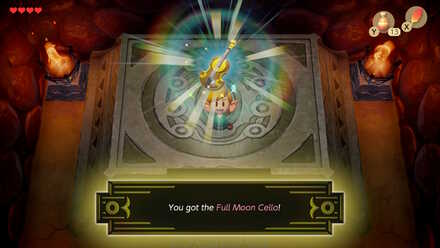 After dying, he will leave behind a Heart Container. Pick it up, and continue to the next room. In this room, you will pick up the Full Moon Cello to complete the dungeon.

In order for us to make the best articles possible, share your corrections, opinions, and thoughts about 「Level 1 - Tail Cave Walkthrough | Zelda: Link's Awakening (Switch)」 with us!