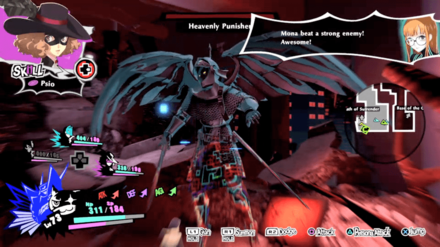 This is a guide on how to defeat the Heavenly Punisher Dire Shadow in the Tree of Knowledge. Read on to find out its weaknesses, strengths, and the best characters to put in your party to defeat it! 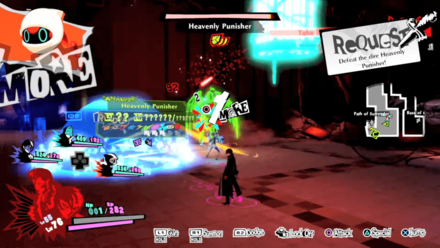 As the last of the Dire Shadows you'll encounter, if you've been finishing each Dire Shadow off as they come, it is expected that you have at least levelled up each of your party members to ~70+. Having less than that will make the fight with this Dire Shadow extremely difficult due to its high damage output.

At this point, all of these characters should be at high levels. Having Morgana with either Haru and Makoto alone will be enough to defeat the Heavenly Punisher. However, to reduce the amount of time you spend in the battle, it's wiser to keep Makoto in reserve due to her ability to gain Nuclear Affinity in her melee attacks. 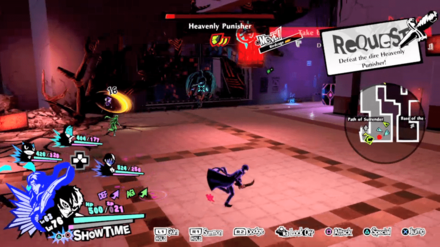 Take care and avoid most of Heavenly Punisher's attacks, which can drastically reduce your just a fourth of your health bar if not K.O. you totally. Many of its attacks area of effect based, so simply jump over these to avoid the damage.

Liberaly make use of Wind and Psy Affinity skill attacks from Morgana and Haru respectively. While you can use Makoto's attacks, it's better to reserve her SP for emergency heals if you need them. Let her gain the Nuclear Affinity for damage bonuses in her melee attacks against this Dire Shadow.

Register as a member and get all the information you want. (It's free!)
Login
Opinions about an article or post go here.
Opinions about an article or post
We at Game8 thank you for your support.
In order for us to make the best articles possible, share your corrections, opinions, and thoughts about "Heavenly Punisher Battle Guide | Dire Shadow" with us!
When reporting a problem, please be as specific as possible in providing details such as what conditions the problem occurred under and what kind of effects it had.