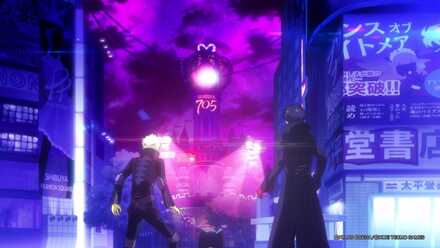 This is the story walkthrough for the Shibuya Jail in Persona 5 Strikers (P5S). Here you'll find a guide on how to complete this area, maps of each featured location, boss strategies, and a list of items that can be found.

Dirty Two-Horned Beast is weak to Zio so do as the game tells you and swap to the Pixie you acquired in the last fight to strike its weakness. Doing this will allow you to hit the A/X button for a follow-up attack. Under its HP bar you’ll see 4 yellow shield icons, known as the Down Gauge. Performing 3 more follow-up attacks will deplete the gauge and succesfully down it, allowing for an all-out-attack. Use a Soul Drop if you run out of SP and continue hitting it with Zio to take out the rest of its HP.

Heavenly Punisher is weak to Elec and Curse, but its Down Gauge won't go down quite so easily. Try to hit it as much as you can, and recover SP if necessary, while avoiding its Makouha and Mapsi which have a wide range and can deal a lot of damage. Once you manage to drain its Down Gauge, go for an All-Out-Attack to deal a large amount of damage and repeat. If you happen to have a maxed out Showtime gauge, this is a good time to use it. Enemies will start appearing throughout the fight as well, allowing you to hit their weaknesses for weaker All-Out-Attacks throughout the fight. Keep this up and it'll go down.

The Night-Walking Warrior can hit pretty hard, but taking advantage of the 3 crackers around the room and wind elemental magic will help take it down. It uses a lot of wide area physical attacks so when you see the AoE marker, dodge out of the way. It will become prone after some attacks so you can take this time to get hits in. Rinse and repeat to down this demon.

The Twilight Prostitue is dangerous in the sense that it can, and will, inflict Brainwash on your party. This will cause them to attack each other, causing KOs if you aren't careful. When you see her casting a spell, target her with any of her weaknesses: Gun, Wind, or Bless. Gun will be the easiest on your SP and two or three shots will down her for a 1 More, quickly tearing apart her Down Gauge for an All-Out-Attack. Be careful of her attacks and she should go down in no time.

The Lock Keeper is no joke. It hits hard and is constantly surrounded by weaker Shadows aiming to get in your way. Don't stay on it for too long as it will soon start swinging its swords around to knock you back. Target its many weaknesses (Fire, Wind, Bless, and Curse) as much as you can to chip away at its Down Gauge for an All-Out-Attack as its HP will go down pretty slow depending on your team. Keep up the damage and it'll bite the dust before long. 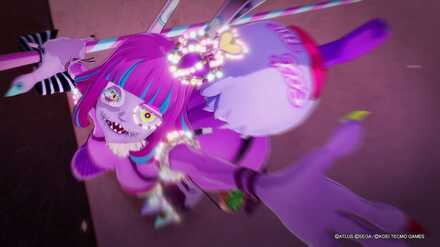 Alice can be pretty tough if you go in unprepared. She attacks with powerful Psi and Physical skills alongside the ability to Brainwash anyone close to her. Bring items that cure Brainwash, which can be bought from Sophia's shop, to keep your team healthy. This fight is made much, much easier if you have Ann and Morgana alongside a Persona of your own that targets one of her three weaknesses (Fire, Wind, and Bless) in order to take her Down Gauge out as quickly as possible. Ann specifically is a huge boon here with her ability to Enchant her whip with Fire to repeatedly strike Alice's weakness.

Alice won't be coming at you too hard during the first part of the fight, giving you time to dodge her attacks. There are also crackers around the room that guarantee a 1 More if they strike her. Make sure you have her in your line of sight before using one, and don't accidentally Baton Pass to a party member about to use one at an inopportune time. The best time to use them during this phase is when she jumps up on to the pole, as it will not only knock her off it, but it will let you get more hits in. Once she reaches half health, she'll move into phase 2.

Alice will break her baton and get down on all fours, making her attacks much more aggressive and eratic. Watch for the AoE marker when she attempts to pounce and stay away when hearts start shooting out of her to avoid Psi damage and Brainwash. She'll no longer jump on the pole, and instead turn into a wheel shape and spin around the arena. This deals a ton of damage if you get hit, so stay locked onto her in order to dodge at the right times. If you saved some crackers from phase 1, try to use them when she does a hip slam, as it will leave her momentarily prone and open to taking damage. Other than the previous attack, staying behind her is generally safe as most of her attacks strike out in front of her. Make sure your party stays in tip-top shape and Alice will eventually go down.

In order for us to make the best articles possible, share your corrections, opinions, and thoughts about 「Shibuya Jail Story Walkthrough and Map | Persona 5 Strikers」 with us!