This page contains information about the side story - The Insignia's New Owner in the game Epic Seven. Read on for more information such as event schedule, rewards, and tips on clearing stages in this event. 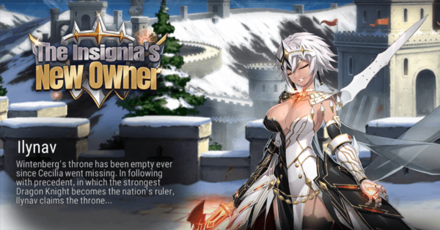 Wintenberg's throne has been empty ever since Cecilia went missing.

In following with precedent, in which the strongest Dragon Knight becomes the nation's ruler, Ilynav claims the throne...

Increased Attack, Health, and Awakened to 6★ with +15 Enhanced Skills

Bracelets that are given as tokens to those who sponsor children who have lost their parents in the war.

The pendants combine to become one when two people put their bracelets together.

NOTE: These currencies will be deleted when the side story is finished.

The format of this content will be the same as the Adventure mode, where you will have to finish a stage before proceeding to the next.

Getting Ilynav from the current Banner, or having an Fire Knight Hero in the team can greatly help get stars for the Region Reward. 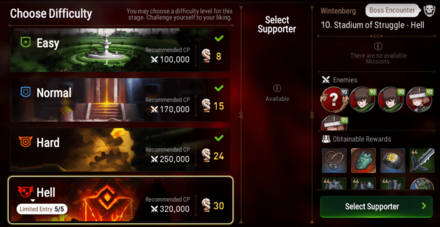 There is a stage in each chapter which offer 4 difficulties for the player. In order to farm the most side story currency with the least energy spent, it is recommended to run the Hell difficulty.

There is a stage in each chapter which offer 4 difficulties for the player. In order to farm the most exp with the least energy spent, it is recommended to run the Normal difficulty.

Register as a member and get all the information you want. (It's free!)
Login
Opinions about an article or post go here.
Opinions about an article or post
We at Game8 thank you for your support.
In order for us to make the best articles possible, share your corrections, opinions, and thoughts about "Special Side Story! The Insignia's New Owner" with us!
When reporting a problem, please be as specific as possible in providing details such as what conditions the problem occurred under and what kind of effects it had.