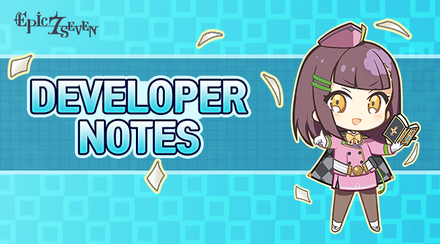 This page contains information about the Events, the Updates,, and other Quality of Life Changes for the game Epic Seven announced for 2021. Read on for the changes and updates that will be applied this coming 5/27 and the coming months!

It's been just about three years since Epic Seven was launched. Now, with more fascinating Heroes than ever before, however, some players may feel a burden in regard to raising them. 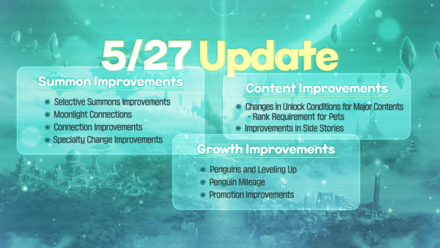 Therefore, Epic Seven will be introducing the following:

These improvements are being implemented so that Heirs can grow their Heroes more comfortably.

To reduce the need to re-roll at the beginning of the game, the Selective Summon system will undergo the following improvements: 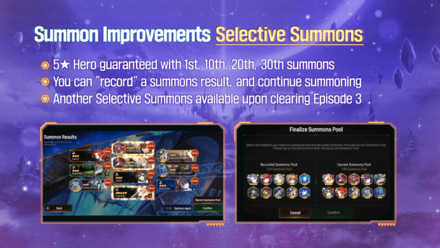 The revamped Selective Summons will now include a guaranteed 5 ★ Hero

A new Record Function will be added where new Heirs can temporarily record a summon pool.

And to help new Heirs, a View Hero Rating Function will be included to better inform new players on which 5 ★ Heroes are must haves!

Now our Heirs will be guaranteed to be able to start their adventure with a 5 ★ Hero.

Note: Additionally, Selective Summons Season 2, with new Heroes in the Hero pool may be added for Heirs who cleared Episode 3.This may be updated at a later date.

Moonlight Connections will now be offered to all Heirs.

Heirs who have cleared Episode 1, Sanctuary Gate Underground will gain access to the new Moonlight Connections.

There, they can choose one out of six Moonlight Heroes that have been with Epic Seven since the beginning of the game. 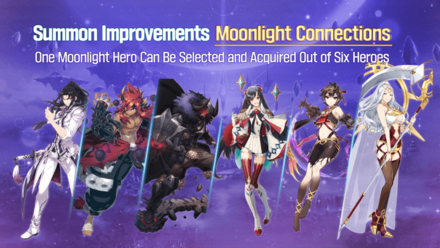 The Moonlight Heroes included are: 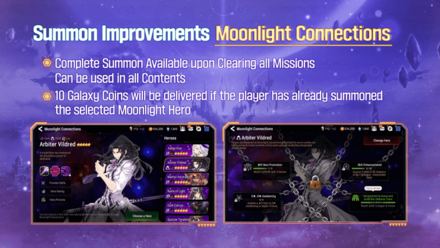 Some functions related to growth will be locked. The four areas of locked content can be unlocked by completing certain missions. After all the missions have been cleared, the Hero will be fully summoned and will be able to be used in all content, like normal Heroes.

If you choose to have a Moonlight Connection with a Hero that you already own, you will be granted 10 Galaxy Coins after having completed all the missions. 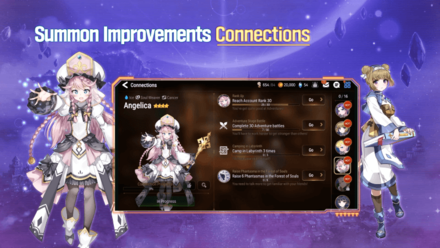 Alexa, Furious, Lorina and Montmorancy can be very helpful to new Heirs trying to clear various content. But obtraining them in Connections may be difficult due to the high difficulty of certain missions.

Therefore, the difficulty level will be adjusted so that new players can make connections with these Heroes earlier.

Angelica, another beloved PvE Hero will also be added to Connections to help players with certain content! 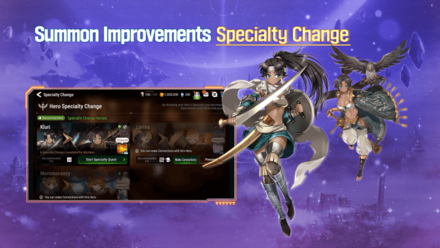 Heroes acquired from Connections such as Lorina and Montmorancy can become stronger by completing a Specialty Change.

To help new Heirs, the following improvements will be made:

Now it's time to strengthen your new Heroes. 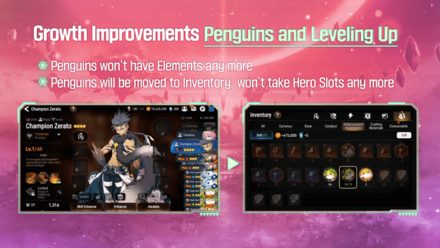 Penguins will now be easier easier to acquire, and easier use.

Penguins will be merged into a single element. And instead of occupying Hero slots, they will be placed in the inventory similar to charms.

There will also be no limit on the number of Penguins you can have, and can be sold right from the inventory area.

The Hero Level up UI will also be improved so that Penguins can be easily used to max Level a Hero. 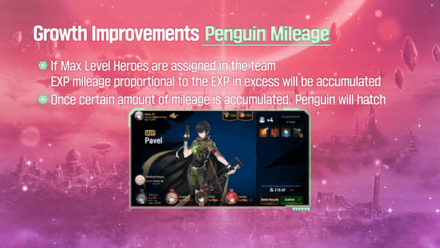 Along with the Penguin improvements, the way that Heroes can be raised will be adjusted for convenience.

From this update, any and all EXP gained by using Max Level Heroes in both the Main Story and Side Stories will be used as Penguin Hatching Mileage.

Once the mileage is full, you'll have earned a Penguin.

With this change, players won't have to constantly rotate in ingredient Heroes but instead can just earn Penguins and use them to level up their Heroes.

This change will help to improve the efficiency of the repeat battle function provided by our various Pets.

The new item, Potion of Ascension will be added to help with the promotion of Heroes.

The Potion of Ascension will instantly promote any Hero to 6 ★.

The areas where this item can be obtained will be limited, but one will be given out for completing the Adventurer's Path.

Rewards and missions for the Adventurer's Path will be adjusted along with the 5/27 update.

If you have already completed all parts of the Adventurer's Path, then this item will be delivered to you in-game via your in-game mailbox.

Certain content will be adjusted so that it can be better utilized at different stages of a player's development.

First, Pets will be unlocked at Account Rank 25 instead of the previous 35, making the Repeat Battle function accessible to Heirs earlier.

As growth will become faster, additional Abyss Guide β and Labyrinth Compasses will be given to our Heirs after reaching a certain account Rank, allowing you to clear more of this content as you become stronger.

Along with these adjustments, Abyss rewards will be improved for Floor 40 and under so that Heirs can obtain Equipment and Charms easier.

Additional Abyss Guide β and Labyrinth Compasses will be delivered to you in-game via your in-game mailbox for Heirs who have already reached the required Rank, after the update has been applied.

A new Special Side Story entitled Dear Mentor will be accessible to all Heirs, acting as a tutorial as to how side stories work.

The side story will feature Alexa, who adores her mentor Iseria, and includes a battle against a boss.

Heirs can obtain MolaGora and Covenant Bookmarks as rewards from completing this Special Side Story.

Side Stories will now unlock after clearing Episode 1.

However, to compensate, the overall difficulty will increase. But Heirs will gain access to a Max Level, Max Awakened and Max Skill Leveled Hero to help them in their journey through the Side Stories.

The rewards for side stories will also be greatly increased and the Energy required to obtain the Main Reward of a side story will be decreased by about 25%.

First, The MolaGora Challenge and Goblin Challenge will be included in all exploratory side stories enabling Heirs to earn more Gold and MolaGora. This will grant more MolaGora and Gold when going through Special Side Stories with multiple chapters that open every week.

Second, Friendship Items, which were first distributed in last year's Christmas side story will be added to the Exchange Shop. The element will follow the Main Hero's element of the story.

Third, the drop rate for Charms will increase on stages and low-level equipment will drop less. This is expected to help alleviate the burden of gaining charms, but also help in regard to Equipment inventory issues.

Fourth, Epic and Rare Catalyst Selection Chests will be added to Quest Rewards and the amount of obtainable Gold will increase.

Lastly, a Receive All function will be added.

With the introduced side story improvements, we'll be well prepared to offer you chances to enjoy more interesting background stories for our many Heroes. 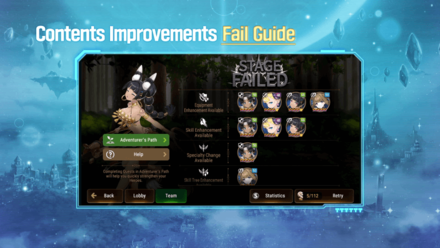 The guide after failing a stage will be improved to include more practical information.

The information will lead to various sections in-game to help strengthen your Heroes to give you a better chance to beat the level. 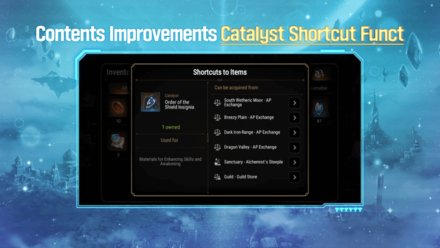 Currently, to search for Catalyst information, players must review region information or the Catalyst Journal page.

This entailed a great deal of effort especially to newer players just to find information as to where to find certain Catalysts.

To relieve this burden, the UI page will be improved to increase visibility and information regarding where to find specific Catalysts. 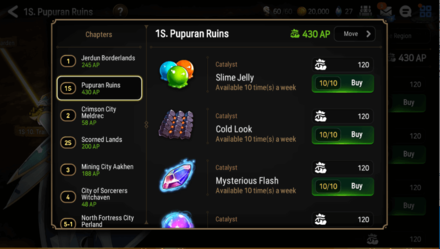 The AP Shop will be updated so that it will now be possible to see and purchase items from various AP Shops within the same continent.

New Type of Side Story! Advent

A new type of side story is being developed, called Advent. 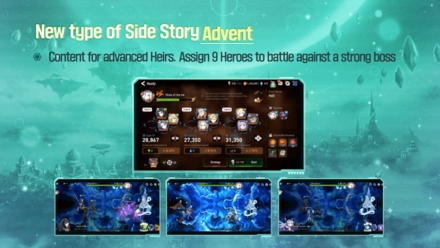 In Advent style side stories, a total of 9 different Heroes will be organized into parties of 3, and will face against a strong boss that will become stronger in each phase.

The battle will consist of three phases, and each party will battle a phase.

As buffs will be granted according to element, a key factor in clearing this content will be having a wide variety of Heroes to choose from.

Since it is tricky to form full parties, this content will only be unlocked for those who have cleared far enough through Episode 2.

For this content, in order to better prepare for battle, Heirs will also have a week long preparation period with the ability to preview the boss before the actual battle takes place.

Heirs can earn the Substat Modification Gems they want from the Exchange Shop and from clear rewards. Also rare, exclusive rewards will be given which can't be obtained from normal side stories.

Additionally, Gem Conversion and Gem Crafting using unwanted Gems may be updated at a later date. 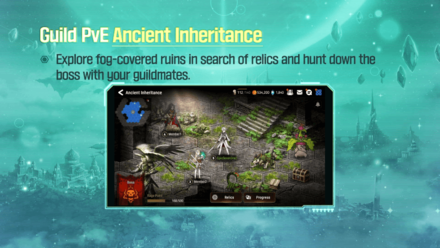 And finally, one of the biggest updates planned for 2021.Guillad PvE content, Ancient Inheritance.

A gate leading to a lost dimension has been found in an isolated area of the Shandra Ruins. Huche, a Memory Chain researcher has requested help from your Guild in order to conduct an investigation.

Ancient Inheritance is a new Guild PvE Content where all guildmates will participate in the exploration of the fog-covered ruins.

To reach the deepest area, you must strategically cooperate with your other guildmates.

The more guildmates that participate and the more you work together, the more efficient your exploration will be.

The Guild that explores the deepest area first will receive higher rewards and will be commemorated on the Great Achievement, which is planned to be updated at a later date.

As it requires different roles to clear the content, including roles such as a treasure hunter or boss tracker, Heirs who are still increasing their account rank or raising heroes can still contribute to the exploration. We hope the Ancient Inheritance becomes a new way for guildmates to bond together.

Ancient Inheritance is scheduled to be updated on our 3rd anniversary.

Note: More details will be made available soon.

Here is a summary of the 2021 update schedule along with what was introduced today. 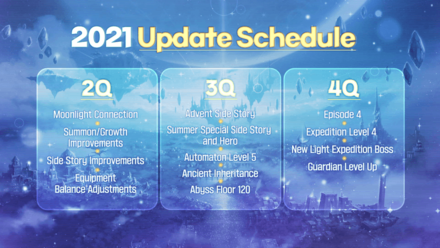 Register as a member and get all the information you want. (It's free!)
Login
Opinions about an article or post go here.
Opinions about an article or post
We at Game8 thank you for your support.
In order for us to make the best articles possible, share your corrections, opinions, and thoughts about "5/27 Epic Seven Update Preview" with us!
When reporting a problem, please be as specific as possible in providing details such as what conditions the problem occurred under and what kind of effects it had.