How to Beat the Reaper | Persona 5 Strikers 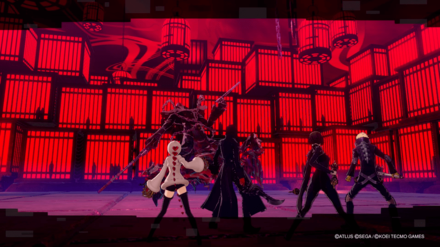 This is a page on how to beat The Reaper, the last of the Powerful Shadows, in Persona 5 Strikers. Read on to find out its strengths and weaknesses, as well as strategies and party composition to bring an end to this Shadow!

If you've played the original Persona 5, you might know of this secret boss that you encounter. In Persona 5 Strikers, you will get a chance at the rematch of the lifetime against The Reaper, an extremely difficult Powerful Shadow fight during the Request Knocking on Death's Door. 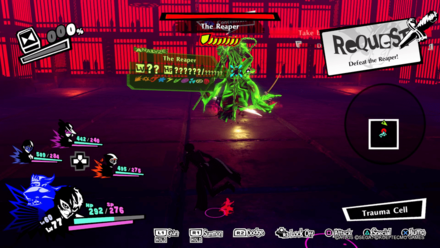 The Reaper has no weaknesses to take advantage of. The best way to deal with it is to fight it at a high enough level (Level 70 or more) to land strong and critical melee hits. Its own ways of dealing with you come with Affinity based skills that subtract great amounts from your health.

How to Unlock The Reaper

You can only unlock The Reaper by finishing all of the requests given to you. From there, you will receive a new Request called Knocking on Death's Door, which will see you heading back to Okinawa Jail.

The Reaper also possesses one last strike called Megidolaon, a heavy almighty attack that can cause severe damage if you cannot avoid. It is similar in effect to Freidyne.

The Reaper Tips and Strategy

Due to the variety of skills The Reaper displays, it is best to simply keep moving around the arena that you fight in, avoiding any of the attacks it sends your way. Patience is key to this battle – if you're lucky, your allies can remain alive despite your foe's attacks, rendering damage even if you are far away.

Approach this fight as a fight you cannot win using Persona skills, and as such, prepare by gathering a variety of Recovery Items, the best weapons and armor, and even levelling up to at least Level 70.

In order for us to make the best articles possible, share your corrections, opinions, and thoughts about 「How to Beat the Reaper | Persona 5 Strikers」 with us!