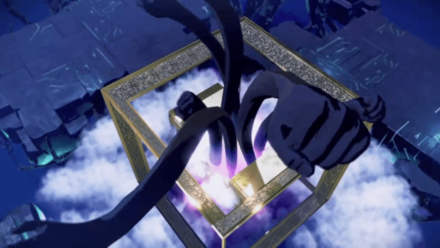 This is the story walkthrough for the Tree of Knowledge in Persona 5 Strikers (P5S). Here you'll find a guide on how to complete this area, maps of each featured location, boss strategies, and a list of items that can be found.

Base of the Great Tree

Neither of these two are very threatening. Focus your attacks on one of them first, preferably the one your Persona is strong against (Yusuke vs The Blackened Fury, Ryuji vs Merciless Inquisitor, and so on). Haru also works well against Merciless Inquisitor since she has a good set of Gun skills while Yusuke works really well against The Blackened Fury since it's weak to Ice and has melee attacks that Yusuke can counter. 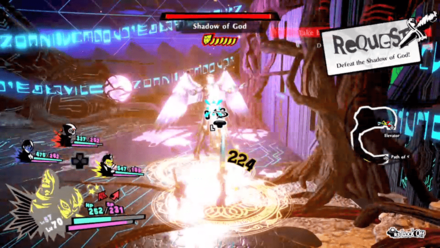 Your first real challenge in this Jail(?) unless you have a Persona like Trumpeter that can block Bless attacks. The Shadow of God is weak to Electric and Curse attacks so use the best one you got to quickly deplete her Down Gauge. Eventually, she will start summoning trash mobs and even pocket versions of herself that can drag the battle. Use the fruit of knowledge hanging around and perform a Phantom Dash to clear them out as soon as possible.

Stay away from your teammates when she starts casting Megidolaon and quickly jump to avoid the attack. Its area of effect isn't really wide but will deal massive damage to any party member caught in the blast. 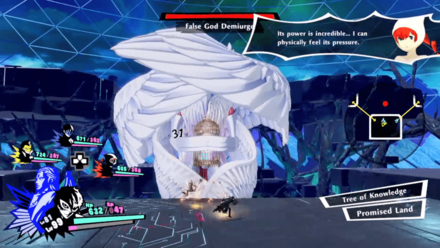 Don't get intimidated by what you see. Assuming that you have the latest gear, you won't get completely obliterated if you got hit by its slow attacks. The Demiurge is resistant to all elemental attacks except Bless and Curse so try to exploit these weaknesses.

Basically you just let out attacks like a madman while paying attention to what Futaba is saying. She will give a description of the Demiurge's next attack such as when it will unleash a frontal attack, flank attack, homing attack, etc. Most of these are easy to dodge except when Futaba says that the field is gonna get toasted, which you should respond by moving through the Path of Light on either side.

Continue attacking until you reach the next phase of the final battle.

Hopefully, you have a decent gear setup even for the characters you're not using. Otherwise, you're screwed. You'll have to divide into 3 groups to weaken the Demiurge. We recommend having at least one healer and one attacker per group and make sure they are all fully recovered before starting the battle.

During the first two battles, your objective is to destroy every sphere in the field. These spheres are squishy but can overwhelm you with their bombardment of different types of attacks. Focus on taking out the spheres that can heal and summon first so the battle doesn't get dragged.

After destroying the spheres, Joker and his party will take on the weakened Demiurge. Same strategy as the first phase: wait for an opening and let out your attacks, preferably Curse and Bless skills. This time, it will use elemental attacks, one after another. The attack that you should be most careful of is the Ice orbs as it will send shockwaves that can freeze your team across the platform.

When it starts casting Voltaic Purge, zip to the other platforms using the Path of Light until it stops, where it will resume its attack pattern.

Once the Demiurge's health bar is completely depleted, you will be prompted to execute an All-Out attack that will put an end to the game's final boss.

Base of the Great Tree

In order for us to make the best articles possible, share your corrections, opinions, and thoughts about 「Tree of Knowledge Story Walkthrough and Map | Persona 5 Strikers」 with us!