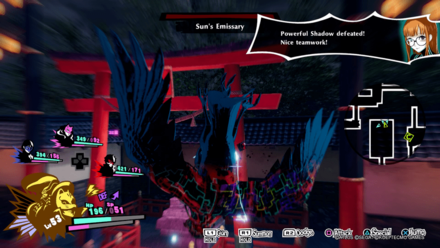 This is a guide on how to defeat the Sun's Emissary Dire Shadow in Kyoto Jail. Read on to find out its weaknesses, strengths, and the best characters to put in your party to defeat it! 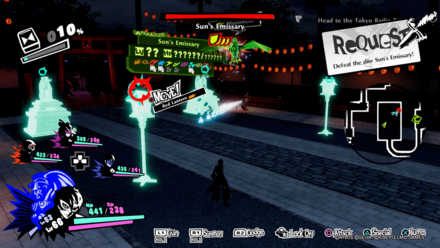 Sun's Emissary is a flying opponent, which may require you to attack it in midair from time to time. You'll need to hammer it with affinity locked melee attacks from Makoto and Ann, alongside constant but well timed skill use to keep it stun locked from being able to attack you.

Joker, Ann, and Yusuke will be your primary skill casters for this fight, allowing you to keep Makoto's SP in reserve for when healing becomes a need, as she can provide good damage with her melee attacks due to her being able to get Nuclear Affinity alongside Ann's Fire Affinity whip attacks. 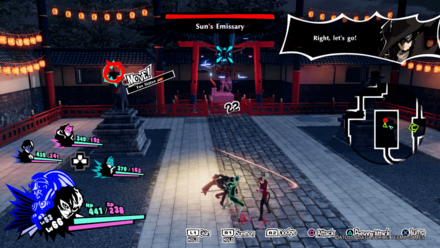 You will need to watch out for its Area of Effect attacks and defend yourself by jumping over them, as these cause great damage to you.Use Makoto to tank hits, and melee it while having Nuclear Affinity for more damage.

You'll need to properly time the use of skills while you fight this Dire Shadow, which allows you to do away with shields close to failing so that you can stun it for more hits. Rotate the skill usage between Joker, Ann/Makoto, and Yusuke while you leave either Ann or Makoto last so that she may be able to produce Affinity based melee hits afterwards.

Register as a member and get all the information you want. (It's free!)
Login
Opinions about an article or post go here.
Opinions about an article or post
We at Game8 thank you for your support.
In order for us to make the best articles possible, share your corrections, opinions, and thoughts about "Sun's Emissary Battle Guide | Dire Shadow" with us!
When reporting a problem, please be as specific as possible in providing details such as what conditions the problem occurred under and what kind of effects it had.