Jail of the Abyss Story Walkthrough and Map | Persona 5 Strikers 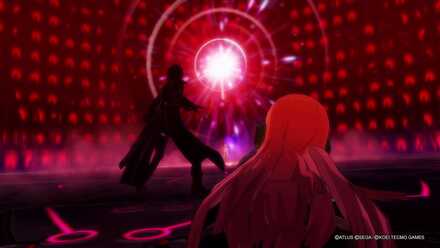 This is the story walkthrough for the Jail of the Abyss in Persona 5 Strikers (P5S). Here you'll find a guide on how to complete this area, maps of each featured location, boss strategies, and a list of items that can be found.

Jail of the Abyss Maps

Jail of the Abyss Story Walkthrough

Jail of the Abyss

Path to the Abyss

Bridge to the Abyss

Hall of the Ark

Depths of the Abyss

Hall of the Ark: Rear Area

Hall of the Ark

Jail of the Abyss Boss Fights 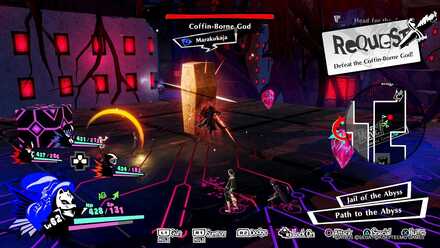 An easy battle. This Shadow is weak to Wind attacks so Morgana's Persona would do well in this fight as well as other Personas you picked up or fused with Wind attacks. Since this enemy has a huge health pool, you'll want to deplete its Down Gauge as soon as possible. When it starts summoning bears, use the mysterious box in the corner to perform a Phantom Dash, which will let you execute an All-Out attack on them that can also damage the coffin. 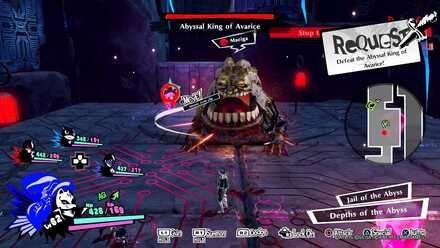 Physical and Gun attacks won't work well against this Shadow. Use members that can deal elemental damage with their combos to make their attacks effective. A good choice would be Makoto since she can infuse her attacks with Nuke damage, which is also one of this slime's weaknesses.

Run around when this Shadow submerges and to avoid its attack when it pops out behind you. Stay away in front of it when it starts casting Maeiga as it will send a wave forward that deals Curse damage. 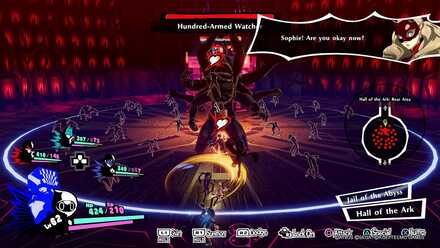 Yeah this boss IS familiar. This one's the same as the Okinawa Jail mini-boss but this time, he got promoted to boss. Same attacks, too, but different set of lackeys. He's still weak to Bless attacks so this is a perfect opportunity to try out Sophia's newly awakened Persona. Spam Bless attacks to deplete its Down Gauge so you can execute an All-Out attack and the watcher will go down in no time.

Jail of the Abyss Items

Path to the Abyss

Depths of the Abyss

In order for us to make the best articles possible, share your corrections, opinions, and thoughts about 「Jail of the Abyss Story Walkthrough and Map | Persona 5 Strikers」 with us!