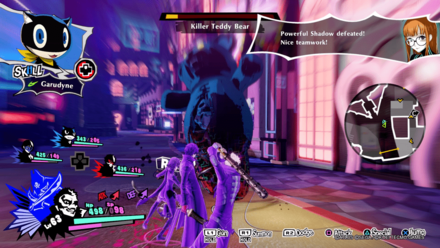 This is a guide on how to defeat the Killer Teddy Bear Dire Shadow in Shibuya Jail. Read on to find out its weaknesses, strengths, and the best characters to put in your party to defeat it! 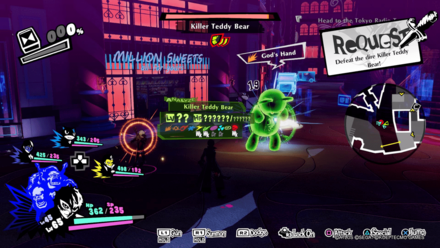 Although you can find the bear straight after clearing Shibuya Jail, it is recommended that you come back to deal with it when you have at least cleared two other Jails you encounter in the main story. Make sure to pack many SP recovery items so that you can continue spamming Persona skills that the bear is weak against.

Due to their strengths in affinities that the Killer Teddy Bear is weak against, having these three characters is essential in helping to end the fight quickly. Make sure to equip one or two healing skills between Makoto, Morgana or yourself to have some cushion against the bear's attacks. 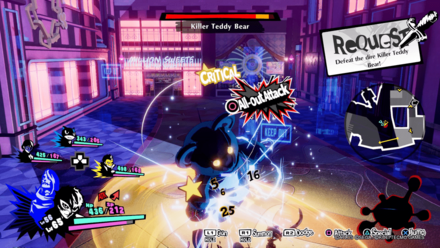 Fighting against the Killer Teddy Bear is easy enough, at least when compared to other Dire Shadow fights. The only attack of it that you should be worried about is when the ground glows a circular red – dash away before it ignites, which can take away a good chunk of your health.

In this fight, alternate between the different characters and use their skills which the bear is weak against to take away its shield buffs. Make liberal use of Wind, Elec, and Makoto's melee attacks to quickly reduce its health.

Register as a member and get all the information you want. (It's free!)
Login
Opinions about an article or post go here.
Opinions about an article or post
We at Game8 thank you for your support.
In order for us to make the best articles possible, share your corrections, opinions, and thoughts about "Killer Teddy Bear Battle Guide | Dire Shadow" with us!
When reporting a problem, please be as specific as possible in providing details such as what conditions the problem occurred under and what kind of effects it had.