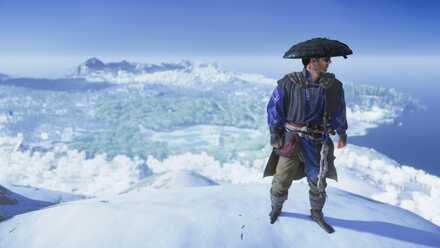 This is a guide for the recommended armor in Ghost of Tsushima. Know what to equip and where you can find them below!

The Traveller's Attire is the best armor to equip when traveling around Tsushima. It is also one of the easiest armor to get, you will only need to find a merchant and speak to him to obtain it.

Its ability to help you track Artifacts is essential, especially when there are so many of them to find. While controller vibration can be annoying, it is also very useful in pinpointing the locations of these hard to find Artifacts like records.

While its ability to clear the fog of war can help you find new locations much more often. So try to have it equipped whenever you are traveling to a new location.

The Samurai Clan Armor is a great armor that can be found early on in the game and is fairly easy to do so. It can be unlocked by finishing the main quest The Tale of Lady Masako It focuses on survivability by reducing damage and increasing your health, letting you take much more hits.

This armor is one of the armors that can be found by completing a Mythic Tale. You will need to finish the tale The Unbreakable Gosaku to unlock this armor. Gosaku's Armor's abilities make it one of the best armors for direct combat.

Its increased stagger damage is one of the strongest abilities when it comes to direct damage as it will allow you to stagger enemies with fewer attacks and its healing properties can keep you alive in longer fights.

The Ghost armor has abilities that can increase your stealth capabilities. Given to you near the end of Act 2 in the main quest From the Darkness. It will slow down the speed of which Mongols will detect you, giving you more time to hide or assassinate them.

The armor will also reduce the number of kills needed to enter the Ghost Stance. This is very helpful as the sooner you get the Ghost Stance and use it, the less likely you are to get hit and reset the counter. The chance to Terrify enemies is also a powerful ability, pair it with Charm of Fortune II and you will have a 65% chance to terrify enemies.

The Mongol Commander's Armor is one of the best if not the best armor in the game. The only downside is how late into the game you can get it. You will need to complete the Act 3 side quest Fit for the Khan to get this armor. It will take some work but it is worthwhile.

The Mongol Commander's Armor has both great combat and stealth abilities. It has the strongest stealth abilities that allow you to run through a Mongol camp without giving the Mongols enough time to react. Its increased health and damage reduction is also great if you do choose to go for direct attacks.

Register as a member and get all the information you want. (It's free!)
Login
Opinions about an article or post go here.
Opinions about an article or post
We at Game8 thank you for your support.
In order for us to make the best articles possible, share your corrections, opinions, and thoughts about "Recommended Armor" with us!
When reporting a problem, please be as specific as possible in providing details such as what conditions the problem occurred under and what kind of effects it had.