How to Parry | Ghost of Tsushima

This article will teach players how to parry in the game Ghost of Tsushima. Keep on reading to learn how to parry the enemy's attacks and what you can do after parrying.

In order to parry an enemy's attack, you simply need to press L1 before an attack hits you. Doing this will give you a variety of openings to attack the enemy while they're off balance.

Keep in mind that not all attacks can be parried. If the enemy's weapons starts to show an orange light, this means that the attack is unblockable and must be dodged. These kinds of attacks cannot be parried, but upgrading your Samurai Techniques will allow you to parry some of them.

The Perfect Parry is the first skill you can get in the Deflection Tree of the Samurai Techniques. In order to attempt a Perfect Parry, you need to unlock the Perfect Parry skill and then press L1 during the last frames of an enemy's attack. This means that you have to block right before you take damage from the attack. 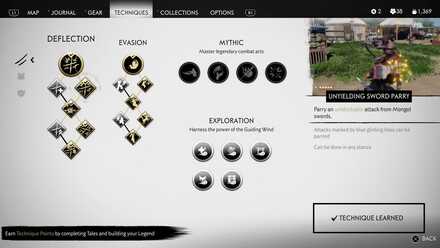 Further down the line of the Deflection Tree in the Samurai Techniques, some skills will allow you to parry unblockable attacks from swords, and then spears.

With this skill, it Perfect Parries can also be performed.

Post (0 Comments)
Opinions about an article or post go here.
Opinions about an article or post
We at Game8 thank you for your support.
In order for us to make the best articles possible, share your corrections, opinions, and thoughts about "How to Parry" with us!
When reporting a problem, please be as specific as possible in providing details such as what conditions the problem occurred under and what kind of effects it had.