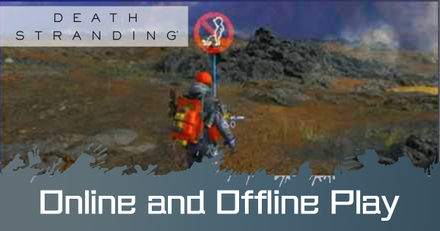 This article discusses the differences between Online and Offline Play in the game Death Stranding. Read on for information about the multiplayer elements of Online Play and how these compare to Offline Play.

The Online Aspects of Death Stranding 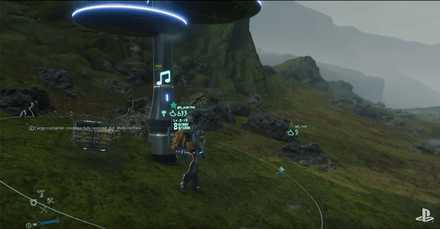 In the world of Death Stranding, connecting to the network opens the player up to a world of other users; however, other players will not be visible in-game, and there is no way to directly contact them. Given those facts, when online players leave behind items and traces like the ones above, they'll remain for other online players to encounter on their own travels. In order to make items left by other players visible on the map, you'll need to connect to the Chiral Network within the game. Mr. Kojima has described Death Stranding as a new genre of 'Strand Game', referring to its uniquely indirect style of multiplayer gameplay.

The Appearance of Structures is Limited by Your Progress

Just because a player started playing the game a while after its release, doesn't mean the world of the game will be crowded with structures built by other players before them. The structures which appear will be limited by the player's progress through the game. There's no need to worry that the game's unique atmosphere will be lost or that the challenge will be spoiled by this feature.

Not the Standard Definition of Multiplayer

There's no concept of Competitive Play or Deathmatch in Death Stranding. The online play can be defined solely by the indirect 'connections' described above.

Can I Play Death Stranding Offline?

It's Possible to Enjoy as a Stand Alone Game

When playing offline, Death Stranding becomes completely 'Stand Alone'. All traces of other players will disappear completely, so you'll have to finish the game entirely on your own, and as expected, the challenge of the game will increase as a result.

Post (0 Comments)
Opinions about an article or post go here.
Opinions about an article or post
We at Game8 thank you for your support.
In order for us to make the best articles possible, share your corrections, opinions, and thoughts about "Differences between Online and Offline Play" with us!
When reporting a problem, please be as specific as possible in providing details such as what conditions the problem occurred under and what kind of effects it had.