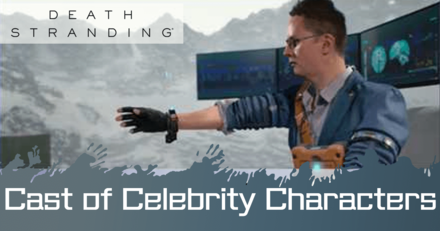 Norman Reedus, best known for playing “Daryl Dixon” in the Walking Dead series, plays the main character, Sam Porter Bridges, in Death Stranding. This isn't the first video game to use his likeness, as he already portrayed his TV character for the game “Walking Dead: Survival Instinct.”

Mads Mikkelsen is a Danish Actor who became well known due to his portayal of the antagonist Le Chiffre in the 21st James Bond film “Casino Royale”. He is also famous for playing Dr. Hannibal Lecter in the TV series “Hannibal” as well as the dark sorcerer Kaecilius in Marvel's “Doctor Strange” and Galen Erso in “Rogue One: A Star Wars Story”. In Death Stranding, he portrayed the game's big bad, Cliff.

Lea Seydoux is a French actress whose claim to fame includes the films “Inglorious Basterds” and “Mission Impossible - Ghost Protocol”, but rose to prominence after her role in the film “Blue is the Warmest Color”. Sam Porter Bridges will encounter Seydoux' character, an enigmatic woman known simply as Fragile.

An actress who became well known in the HBO series “The Leftover”, Qualley has also appeared in the films “The Nice Guys” and “Once Upon A Time In Hollywood”. She has also done roles in the Netflix films “Death Note” and “IO”. In this game, Qualley is cast in the role of Mama.

A film maker who is best known for his work on “Pan's Labyrinth”, which scored him an Oscar for Best Director, as well as two “Hell Boy” films and “The Shape of Water”. In the game, his likeness is used for the character Deadman.

A Danish film director, screen writer, and producer. Well known for creating crime dramas like “Drive”, “Only God Forgives”, and the “Neon Demon”. You will meet him in-game as the character Heartman.

An American voice actor. He is famous for his work as Joel in “The Last of Us” and as the voice of Kanji Tatsumi in the English version of “Persona 4”. He has also alternated between Batman in a few games and The Joker in “Batman: Arkham Origins”. Baker plays the character Higgs in this game.

An American actor from Ohio. He is known for a variety of works, particularly “Pandora” and “Papi Chulo”.

Lindsay Wagner is an American actress best known for her work in the T.V. series “Bionic Woman”. She starred in the series as Jamie Sommers, a cult classic icon. Her role among the Death Stranding cast is Amelie, daughter of the previous president.

Other Celebrity Cameos as Preppers

Thomas Sutherland is based off of Edgar Wright. Edgar Wright is a popular screenwriter, director, and producer, he is widely known for his work on the movie ''Scott Pilgrim vs. the World''.

The Musician is based off of the famous singer, dancer, and song writer from japan, Daichi Miura.

The Novelist's Son is based off of the popular japanese novelist, Manabu Makime.

Tommy Wirkola, the norweigan director who is known for his work on the movie ''What Happened to Monday'' also appeared in the game as Philip North.

The Collector is based off of the former Chief Editor of Famitsu, a japanese games magazine.

The Veteran Porter character was inspired by a real life Actor/Writer Sam Lake. Sam Lake is known for his work on the games Max Payne and Alan Wake.

The popular director Jordan Vogt-Roberts was used as an inspiration for the character The Film Director. Jordan Vogt-Roberts is widely known because of his work on ''Kong: Skull Island''. If you go and view the side of his facility, you will be able to see a shouting gorilla displayed.

The Late-Night talk show host Conan O'Brien also appeared as one of the NPC in Death Stranding, he can be seen as the partner of The Cosplayer once you reach a higher connection level. Conan O'Brien will reward you with Otter Hood.

In order for us to make the best articles possible, share your corrections, opinions, and thoughts about 「Cast of Celebrity Characters | Death Stranding」 with us!