This is the Characters section for the game The Outer Worlds. Refer to this page for a list of available characters within the game. 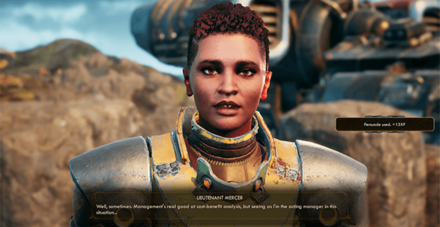 This is the Characters section for the game The Outer Worlds. Refer to this page for a list of available characters within the game.

The characters in The Outer Worlds are a mixed bag. There are characters that are friendly to the player and there are some that are... not as much. These characters in the game gives the world of Halcyon more color and life than the surroundings and combat could ever do on their own!

These are the characters in the Halcyon colony who help your player along the way. Some of them may even join you on your adventure.

The enemies include both hostile fauna found on the planet and other colonists like Marauders, who are against your every move. Be careful when encountering them!

These are Allies which, as mentioned earlier, joins your character in their mission to uncover Halcyon's deepest secret. They also help your character survive in more ways than one.