This is a guide to Reputation and a list of Factions in the game The Outer Worlds. Learn about each Faction, where they are located, and how Reputation affects your relationship with each. 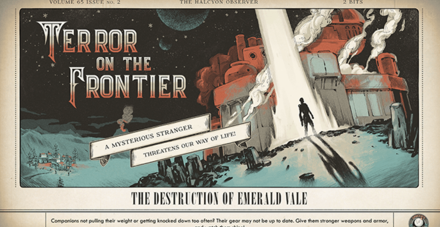 This is a guide to Reputation and a list of Factions in the game The Outer Worlds. Learn about each Faction, where they are located, and how Reputation affects your relationship with each.

The Halcyon Colony is host to a number of Factions, each with their own personal objectives. As a result of your actions, you may come into favor or disfavor with each of these Factions during your adventures – this is measured by your Reputation.

Actions like completing objectives within Quests, killing individuals of a certain Faction, stealing items in an area belonging to a Faction, and others can affect your Reputation for that Faction.

If your Reputation with a Faction is too poor, you will be attacked by adherents of that Faction, so think twice before setting foot in their controlled areas.

Your Reputation will also affect the options available during Quests, so keep an eye on your reputation to ensure you can get your preferred ending for each Quest.

A former colony ship turned space station, Groundbreaker is the only township in the system operating outside the Board's control. The Groundbreaker's crew are led by engineer-turned-captain Junlei Tennyson, and they are fiercely protective of their independence.

The Iconoclasts are a group of survivalists living in the ruins of Amber Heights on Monarch. Led by Graham Bryant, a staunch Philosophist, they hope to one day tear down the corporate establishment that they believe has brought the colony to the brink of death.

Once a loyal Board-owned corporation, Monarch Stellar Industries split off to become their own private entity under the leadership of Sanjar Nandi. Espousing worker-centric rights and democratic ideals, Sanjar seeks to bring his own brand of freedoms to the rest of Halcyon.

SubLight is a network of “salvagers” with business ties to “transportation” and “waste disposal.” A tangled web of contractors and secretive vice presidents make up their official hierarchy, leaving no one to speak on the record about SubLight's more legally-dubious activities.

The Halcyon Holdings Board of Directors is a group of CEOs from each of Halcyon's founding companies. Under the leadership of Chairman Rockwell, the CEO of Universal Defense Logistics, the board institutes policy and law throughout the Halcyon colony.

Auntie Cleo brings millenia of scientific research and advancement to your neareset pharamaceutical outlet or convenience store. With everything from their “Auntie-Biotics” line of medicinal solutions to their straight-from the laboratorary Tripicale foodstuffs, you're sure to find something for everyone.

Auntie Cleo: It's better than nature!

The Deserters are a community of disillusioned workers who left the town of Edgewater. They live together in a makeshift camp located in the Botanical Lab district of Emerald Vale.

Spacer's Choice is the favorite brand for a colonist on the budget. The town of Edgewater, and the region of Emerald Vale, are properties of the Spacer's Choice company.

This cystypig processing facility on Monarch was once owned and operated by C&P. Now it is run by Clive Lumbergh, the self-proclaimed “Boarst King”, who keeps the factory producing canned boarst for sale in the region.

Register as a member and get all the information you want. (It's free!)
Login
Opinions about an article or post go here.
Opinions about an article or post
We at Game8 thank you for your support.
In order for us to make the best articles possible, share your corrections, opinions, and thoughts about "Reputation & Factions" with us!
When reporting a problem, please be as specific as possible in providing details such as what conditions the problem occurred under and what kind of effects it had.