This is the Quest section for the game The Outer Worlds. Refer to this page for a list of quests available within the game. 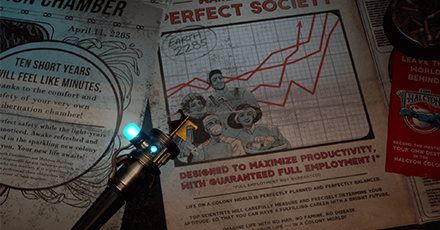 This is the section for the game The Outer Worlds. Refer to this page for a list of available within the game.

In most games, quests are tied to the storyline and some of them are given on the side to add to the main story. The same is true for The Outer Worlds. These quests move the story along and are what helps the main character--the Stranger--earn his or her levels.

Some quests rely on other quests being completed before they show up on the ledger. In the same way, some people may require you to complete other quests before joining up. Quest dependencies are further explained in the Quest Log.

The player's active and completed Quests all appear in this screen. If the player wants to change their current active quest, this is the section to do it.

All Side Quest Guides

Register as a member and get all the information you want. (It's free!)
Login
Opinions about an article or post go here.
Opinions about an article or post
We at Game8 thank you for your support.
In order for us to make the best articles possible, share your corrections, opinions, and thoughts about "Quests and Story Walkthrough" with us!
When reporting a problem, please be as specific as possible in providing details such as what conditions the problem occurred under and what kind of effects it had.