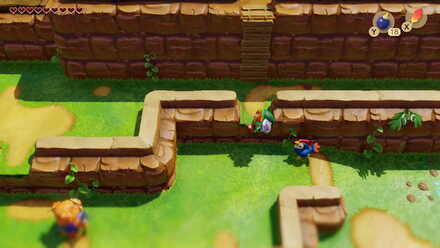 This is a page for Speedrunning Techniques and Glitches you can do in The Legend of Zelda: Link's Awakening (Remake) for the Nintendo Switch. Read on to learn how to execute these glitches and cut your speedrun time down.

This technique is considered to be RNG manipulation as it locks the D4 pattern and the Wind Fish's Egg maze solution.

You will know the pattern that you should take on the Egg maze on the room below the Flipper room at Dungeon 4.

Take a peak on the room. If the light is hovering above the upper right tile, then you have executed the technique within the target time window. Your Egg maze solution will be RRRRULLU. 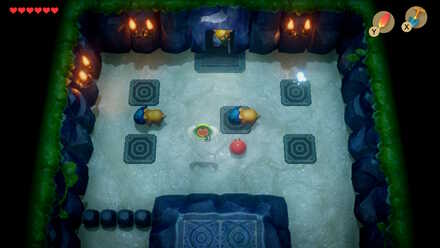 The game has an auto-save feature which saves the game automatically in a separate slot each time an important action is done like picking up keys, opening chests or locked doors, etc. The auto-save icon will then appear at the bottom right of the screen, indicating that the game is autosaving.

You can then access this autosave slot at the pause menu to warp back to the entrance of the cave or the dungeon while also resetting red/blue switches back to red.

Angle Skewing refers to the technique which makes Link face any angle other than the directions he can normally face.

Using Roc's Feather is the easiest way to do this technique. Just use Roc's Feather to jump and before Link lands, move the analog stick to where you want him to face.

You can also use the Shovel for angle skewing but it will be more difficult to execute than using the Roc's Feather. Use the Shovel and move the analog stick to a different angle before the digging animation ends.

When you move normally while your angle is skewed, it will make Link face one of the 8 directions he is normally locked to. To maintain your skewed angle, charge for a spin attack and move around before releasing it.

Hit Twice with One Spin Attack

Enemies positioned near Link's sword-hand (his left side) will be hit twice by a spin attack. You can use this technique to defeat strong enemies like bosses faster, especially on speedruns.

To do this trick you need to be with the legendary Rooster. This trick will work on any ladder in Koholint Island.

First, you need to position the rooster on the tile of land above the ladder. Make sure that you can grab it as soon as you hit the top of the ladder.

Second, you need to position Link to the floating state. To enter this state you must first go down the ladder and stop as soon as its starting the ladder animation. From there slightly tap the down analog and jump then press up. Now, you will be positioned to a floating state where you are standing on an invisible ladder. When you reach this state you can pause and think about the next step.

For the third and the most difficult part, you will have to grab the rooster then tap up very slightly. Wait for the analog to come back to its normal state, then follow it by holding the analog stick up.

Doing this correctly will allow Link to climb higher while riding the rooster allowing you to fly on unreachable areas.

If you execute the Air Climbing Glitch too early, it will make the rooster pass through the floor allowing you to fly outside the island. You can do this to explore unreachable areas in Koholint Island.

This glitch is meant for lower ledges, as it gives you a weaker push. Plant the bomb near the platform you want to climb. Wait for the 6th tick, then jump and aim towards the direction of the platform. Link will die, but will be revived on top of the platform by the Secret Medicine.

Upon entering the hinox room, walk to the bottom left corner. The hinox will try to grab you but it will miss. Right after it misses its attack, go up to the upper left corner. You should be facing north while you are at the corner.

Wait until the hinox dashes again then use a bomb arrow right before it grabs you. If you hit the timing correctly, the hinox will throw you to the upper right part of the room and you will be able to traverse the walls of the dungeon.

Register as a member and get all the information you want. (It's free!)
Login
Opinions about an article or post go here.
Opinions about an article or post
We at Game8 thank you for your support.
In order for us to make the best articles possible, share your corrections, opinions, and thoughts about "Speedrunning Techniques and Glitches" with us!
When reporting a problem, please be as specific as possible in providing details such as what conditions the problem occurred under and what kind of effects it had.