This is a guide to to the October 2021 rerun of the Turbo Duel Grand Prix event in the game Yu-Gi-Oh! Duel Links. Read on to learn how to participate in Turbo Duels, and obtain the different gifts and rewards available during the event. 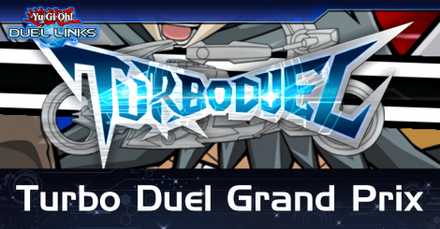 This is a guide to to the Turbo Duel Grand Prix event in the game Yu-Gi-Oh! Duel Links. Read on to learn how to participate in the raid, and obtain the different gifts and rewards available during the event.

The Turbo Duel Grand Prix is part of a series of occasional event that provides and rewards players to Duel against other players from all across the globe! In this unique instance, however, all Duells will be run under a fan-favorite mechanic usually exclusive only to events: Turbo Dueling!

An additional thing to note is that wins during the Turbo Duel Grand Prix count for collective Ranked wins, thus adding to the rewards for each win.

Turbo Duels play like a regular Duel, but there is a Speed Counter to take note of. Speed Counters are gained (up to a maximum of 12) whenever the following conditions are met:

Gaining them will be extremely valuable, as you can spend your Speed Counters to activate the EX Skill Speed Spell , which is exclusive only to Turbo Duels in this event. This is completely separate to your character's equipped skill, so you are able to use both the equipped Skill and the EX Skill at the same time.

You can also activate each effect once per turn if you have enough Speed Counters to spend.

For this event, a select number of characters from Yu-Gi-Oh! 5D's has their own set of Speed Spells! Make sure to take into account each of ther abilities before jumping into a match!

On occasion, you will be able to earn a multiplier in your Lottery Coin earnings on your next Duel Win. Keep on Dueling to constantly get a chance to have these multipliers, which can go as high up as five times the reward!

While this may be a 5D's-centric event, expect Decks that are normally not run with specific players or specific themes (specifially Synchro Summons) solely because of the event's PvP nature. Keep an eye out for these Decks that have been noted to appear frequently during Ranked matches.

Every time you go up a Grade, you will be rewarded! The amount of Lottery Coints you can receive will also increase the higher your Grade is. Good luck, Duelists!

This event runs on a lottery system, meaning you can possibly infinitely farm materials so long as you can keep earning Lottery coins! Keep Dueling and winning to get more chances to roll the lottery!

Register as a member and get all the information you want. (It's free!)
Login
Opinions about an article or post go here.
Opinions about an article or post
We at Game8 thank you for your support.
In order for us to make the best articles possible, share your corrections, opinions, and thoughts about "Turbo Duel Grand Prix - October 2021" with us!
When reporting a problem, please be as specific as possible in providing details such as what conditions the problem occurred under and what kind of effects it had.