This is a guide for building a Melodious Deck in Yu-Gi-Oh! Duel Links. Learn which cards are needed to build this Deck, how to play the Melodious archetype, as well as counters, and more! 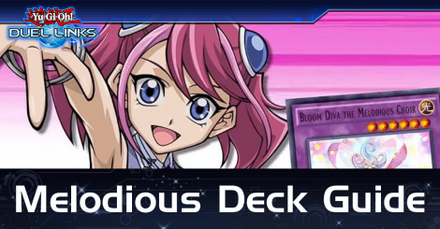 This is a guide for building a Melodious Deck in Yu-Gi-Oh! Duel Links. Learn which cards are needed to build this Deck, how to play the Melodious, as well as counters, and more!

An archetype that focuses on Fusion Summons to specifically counter all Special Summon monsters, Melodious can easily transition from control to beatdown when it manages to swarm the field with Monsters. Players should look out for this Deck's ace monster, which happens to be one of the newest cards added to the game with the introduction of the ARC-V World.

How to Play Melodious 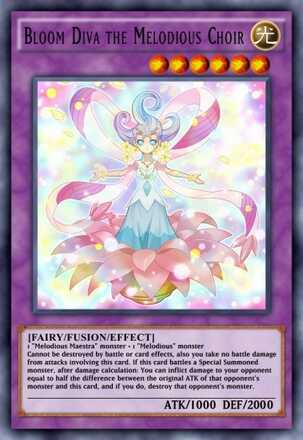 Ironic as it is, this archetype that counters Special Summons happens to be its own weakness; negating the Fusion Summon process or the effects of the Main Deck monsters will come a long way. Do not let this Deck get a chance to bring out Bloom Diva, otherwise any Special Summoned monster will fall against it.

As the Deck's boss monster is immune to card destruction effects, you have to be prepared to remove cards from the field with different ways. Being shuffled back to the Deck, a forced return to the hand (or Extra Deck for Fusion Monsters' cases) or Banishment from the field all work against Bloom Diva.

Register as a member and get all the information you want. (It's free!)
Login
Opinions about an article or post go here.
Opinions about an article or post
We at Game8 thank you for your support.
In order for us to make the best articles possible, share your corrections, opinions, and thoughts about "Melodious Deck Guide" with us!
When reporting a problem, please be as specific as possible in providing details such as what conditions the problem occurred under and what kind of effects it had.