Red Nova Dragon is Jack Atlas's strongest ace monster, so it stands to reason that the Deck this belongs in holds overwhelming power. True to form, the Red Nova Resonators Deck aims to summon high-powered monsters that can punch through the tightest of defenses, while having enough support to safely commit to an OTK.

How to Play Red Nova Resonators 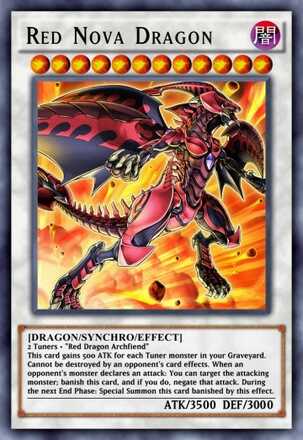 The Deck doesn't have much to Set in terms of Spells and Traps; all of the work on this Deck happens on its turn. Thus, if you can survive the onslaught, you have the window needed to take down the Boss monsters like Red Nova Dragon and Infernity Doom Dragon.

Getting Red Nova Dragon or the Level 8 or higher Synchro Monsters out on the field is a very tedious process in itself. Players going up against Red Nova Resonator Decks should be prepared to throw everything against this Deck to stop the combo from being completed, preventing the stronger monsters from entering the field.

Register as a member and get all the information you want. (It's free!)
Login
Opinions about an article or post go here.
Opinions about an article or post
We at Game8 thank you for your support.
In order for us to make the best articles possible, share your corrections, opinions, and thoughts about "Red Nova Resonators Deck Guide" with us!
When reporting a problem, please be as specific as possible in providing details such as what conditions the problem occurred under and what kind of effects it had.