This is a guide for building a Harpies Deck in Yu-Gi-Oh! Duel Links. Learn which cards are needed to build this Deck, how to play the Harpies, as well as counters, and more! 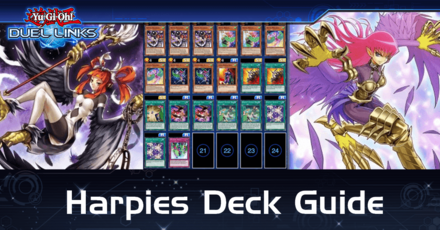 This is a guide for building a Harpies Deck in Yu-Gi-Oh! Duel Links. Learn which cards are needed to build this Deck, how to play the Harpies, as well as counters, and more!

You want to try and put out your Cyber Slash Harpie Lady as quickly as possible. In order to achieve this, swarm the field with Harpie monsters. The Harpies themselves are a strong enough win condition that you don't need to focus on winning with your boss monster.

How to Play Harpies

Play as many Spell or Trap cards as possible in the early game, especially those that can negate Special Summoning effects. This will help shackle the chain summoning of Harpies, and prevent them from setting up the board.

Try to tech LP gain into your deck. Harpies are aggressive decks so they tend to struggle in the mid to late game. Other than boss monsters like Cyber Slash Harpie Lady, the Harpie archetype generally has low ATK on their monsters. Take advantage of this using LP gain to prolong the duel.

Register as a member and get all the information you want. (It's free!)
Login
Opinions about an article or post go here.
Opinions about an article or post
We at Game8 thank you for your support.
In order for us to make the best articles possible, share your corrections, opinions, and thoughts about "Harpies Deck Guide" with us!
When reporting a problem, please be as specific as possible in providing details such as what conditions the problem occurred under and what kind of effects it had.