This is a guide for building a Fire King Deck in Yu-Gi-Oh! Duel Links. Learn which cards are needed to build this Deck, how to play the Fire King, as well as counters, and more! 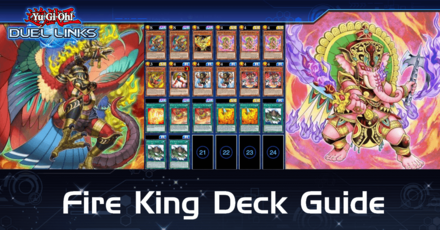 This is a guide for building a Fire King Deck in Yu-Gi-Oh! Duel Links. Learn which cards are needed to build this Deck, how to play the Fire King, as well as counters, and more!

The Fire King Deck's goal is to continuously destroy the field and deplete the opponent of their cards, while the player continuously reactivates and brings back their cards from the Graveyard. This Deck can OTK (One Turn Kill) through the effect of Fire King High Avatar Garunix destroying the entire field. If the Deck doesn't OTK, it will at least last long in a Duel. The Deck will also rarely brick because of searcher cards like Fire King Island, Fire King Avatar Barong, and Onslaught of the Fire Kings.

How to Play Fire King 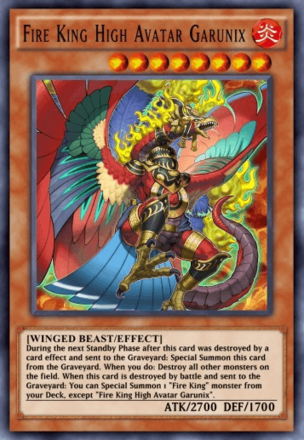 Window of No Defense

Take advantage of the window wherein the opponent has no cards on the field and, likewise, no defense. It won't certainly win you the Duel if you don't do anything about the opponent's Fire King High Avatar Garunix cards, but the damage dealt within this window will give you a fighting chance.

Register as a member and get all the information you want. (It's free!)
Login
Opinions about an article or post go here.
Opinions about an article or post
We at Game8 thank you for your support.
In order for us to make the best articles possible, share your corrections, opinions, and thoughts about "Fire King Deck Guide" with us!
When reporting a problem, please be as specific as possible in providing details such as what conditions the problem occurred under and what kind of effects it had.