We regret to announce that we are ending the coverage of Yu-Gi-Oh! Duel Links. Our Card articles, Deck Guides and previous event guides will still be available until the end of March 2022.

Thank you for all the support in reading our coverage of updates, event guides and card releases for Yu-Gi-Oh! Duel Links.

For all fellow Yu-Gi-Oh! enthusiasts and Duelists, we would like to redirect you to our Yu-Gi-Oh! Master Duel Page for our ongoing coverage, Deck recommendations and tier lists.

This page contains information on the latest news and updates in the game, Yu-Gi-Oh! Duel Links. Read on to learn about the newest events and campaigns as well as how to participate!

The Tag Duel Tournament makes a return! Pair up with some of the Legendary Duelists across different Duel Worlds and go through different cups from each era for prizes galore!

The Tour Guide from the Underworld makes a return with a new set of Bingo Missions for all Duelists! Complete the missions to get special prizes, includingg a brand-new card released in Duel Links!

Released as part of the celebration of Duel Links' 5th anniversary, a brand new Structure Deck EX has been released to celebrate the new year, with support for Dark Magician, Buster Blader and Blue-Eyes White Dragon!

As part of the celebration of Duel Links' 5th anniversary, a new Selection BOX has been released! Lots of the cards here are helpful for new players and beginners, so give this limited-time BOX a shot!

When Duels always carry gifts, the Gift Festival campaign is now live! Expect rewards that come immediately or behind a timer, and short them down through Dueling as much as possible!

Whenever you log in during the campaign starting on 01/14/2022, there will be four chances for you to receive a special gift that you can receive simply by Dueling. This is completely random, so never miss your chance!

When a card gets far too strong for the meta and in competitive, expect them to be given a limitation to how many copies you can hold of said card in a Deck. Their changes in availability directly affects their position within the Tier Lists above.

New Premium accessories are now available for purchase! Spend a little to bling out your cards and your field!

In tandem with the 25th anniversary of Yu-Gi-Oh!, there is a in-game poll that players can vote on choosing iconic monster battle scenes from the manga that will become accessories! The top 3 themes will be made into Card Sleeves and Game Mats, and will be given to all players!

With the start of a new month comes a new season of Ranked Duels. This gives new opportunities for all players to rise the ranks and earn amazing rewards. A new set of cards have also been made available through Ranked Duel Tickets.

Because a new season of Ranked Duels has begun, all Ranked Duel Tickets from the month of October have now expired. This month is also the last time you can use the tickets you have earned last November.
Ranked Duels Season 72 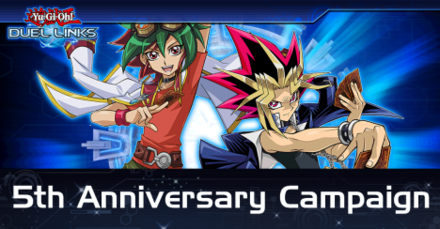 Announced as a global campaign during a stream from the official Japanese Yu-Gi-Oh! YouTube channel, this campaign will be launched to celebrate the fifth anniversary of Yu-Gi-Oh! Duel Links! During this time, the game gives out free bonus rewards to players simply for logging in.

Witht the release of Monster Reborn as an available card, it will be immediately placed into the Limited Card List as Limited 1 at the first day of the campaign.

This campaign was launched to celebrate the fourth anniversary of Yu-Gi-Oh! Duel Links. During this time, the game gives out free bonus rewards to players for logging in.

On the released list of events planned for September 2021, Duel Links has teased the launch of the next Duel World at the end of the month. Now, the ARC-V patch has arrived with the Version 6.0.0 update on September 28, 2021!

Players may remember that ARC-V has been confirmed to arrive in 2021 during the Digital Next stream, and with it came the release of a brand new mechanic much like the previous worlds have introduced to the game!

To keep track of all the new updates regarding the new Duel World, click on the link below!

To celebrate the release of the ARC-V World, rewards will be given out to all Duelists! Players can log in up to six times to receive UR and SR tickets!

As an additional bonus, all players will receive prismatic versions of two Pendulum Monsters in Timekeeper Magician and Stargazer Magician, alongside other freebies the first time they log-in after the release of ARC-V.

The popular card game celebrates 25 years of Duels in all platforms, and that includes Duel Links! As a token of appreciation for all the years of support, massive freebies are being given out! Do not miss your chance and enjoy the celebration!

A free Skill Ticket is up for grabs for all Duelists should a certain condition be fulfilled during the campaign duration!

Also, a lottery is up for grabs for all players in the server, and lucky players will be receiving a massive amount of Gems! Cross your fingers and hope it could be you!

The first time you log in during this campaign, all players automatically receive this as a reward:

On top of that, logging in for a number of times during the campaign nets you with more Card Tickets! Make sure to get all of them before the campaign ends!

Post (1 Comments)
Opinions about an article or post go here.
Opinions about an article or post
We at Game8 thank you for your support.
In order for us to make the best articles possible, share your corrections, opinions, and thoughts about "Events & Updates" with us!
When reporting a problem, please be as specific as possible in providing details such as what conditions the problem occurred under and what kind of effects it had.