How to Build a Good Deck | Duel Links

This article will show you how to build a good deck that can compete in Ranked Battles in the card game Yu-Gi-Oh! Duel Links. 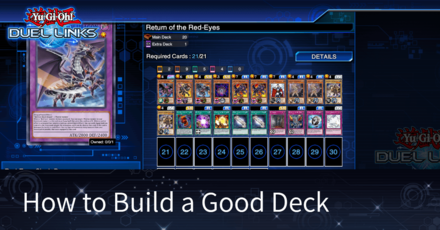 This article will show you how to build a good Deck that can compete in Ranked Battles in the card game Yu-Gi-Oh! Duel Links.

How to Build a Good Deck 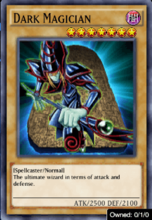 In Yu-Gi-Oh! Duel Links, there are monsters that you can build your deck around called Boss Monsters. These monsters are the strongest cards in your deck and your win condition.

The best example of this is Dark Magician. Dark Magician is a card that has many supporting cards and a strong body, making it a powerful Boss Monster.

Archetypes are different 'types' of Decks. There are numerous archetypes but the basic ones are 'Control' and 'Aggro'. Your archetype depends on the cards you have in your Deck. Dark Magician Decks tend to be control because you want to remove opposing monsters until you can Summon your Boss Monster. 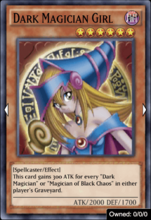 Adding monsters is an essential part of Deck building. There are hundreds of monsters to choose from, so you will need the right ones to guarantee success in each Duel. These monsters will be there to help you bring out your Boss Monster's potential.

Dark Magician Girl comes to mind as a good support monster. This card's effect directly involves Dark Magician as she gains 300 attack for every Dark Magician in either player's Graveyard. 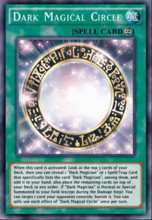 Spell and Trap cards are the backbone of your Deck. They are there to help your Boss and support monsters.

Dark Magical Circle is a key Spell card in Dark Magician Decks because it helps you remove an opposing monster when you have Dark Magician on the field.

Here is an example of a completed deck for Dark Magician. This deck incorporates the Boss Monster, support monsters, Spell and Trap cards. Furthermore, this Deck is a control archetype, making it a bit more challenging than aggressive Decks.

Register as a member and get all the information you want. (It's free!)
Login
Opinions about an article or post go here.
Opinions about an article or post
We at Game8 thank you for your support.
In order for us to make the best articles possible, share your corrections, opinions, and thoughts about "How to Build a Good Deck" with us!
When reporting a problem, please be as specific as possible in providing details such as what conditions the problem occurred under and what kind of effects it had.